EdgeCast has secured $10 million in Series C funding from an investor group led by Menlo Ventures. The content delivery network has raised a total of $20 million since 2007, counting Steamboat Ventures (Disney’s venture arm), Mark Amin (Vice Chairman of CinemaNow) and Jon Feltheimer (CEO of Lionsgate) as investors. EdgeCast, which has been profitable since the fourth quarter of 2009, says the funding was necessary due to a surge in consumer demand and the need to scale up. Steamboat also participated in this round. Here’s a copy of an internal e-mail sent by a senior executive:

I’m pleased to let you know that on Monday we will formally announce a
Series C financing of $10 million, led by Menlo Ventures, one of
Silicon Valley’s top venture capital firms.

As you know, we have been profitable since late last year, so this was
not a case of needing to raise money. But customer demand has been
exploding – faster than even we, in our entrepreneurial optimism,
expected. We wanted to be in a very strong position to take advantage
of it, so we felt it a wise strategic move to scale up more quickly.

This cash will help us do exactly that. We have a strong pipeline of
cool new products, services and features, and the additional resources
will help accelerate their development and launch. We are adding to
the team and expanding our sales and marketing programs. And perhaps
most important, we will also be able to grow the network faster.

Under the deal, Menlo Ventures’ managing director, Pravin Vazirani, will join the company’s board of directors. Explaining his investment, Vazirani says: ” users demand a high-quality, instant-on experience – something legacy CDNs weren’t built to deliver. As both supply and demand for content continue to surge, EdgeCast is ideally positioned to capitalize on that growth.”

Founded in 2006 by CEO Alex Kazerani and President James Segil, Edgecast competes with other CDNs (like Akamai, Limelight Networks) to help websites around the world deliver multimedia (i.e. music, video, live stream, etc) to the end user. One of the company’s strengths is its flexible pricing model, there are no fixed bandwith contracts. Customer prices are tied to actual bandwidth costs. Edgecast serves over a thousand clients including IMAX, WordPress, ESPN, Kelloggs, LinkedIn and Lionsgate.

While it has several big names on its roster, the company has been aggressively targeting smaller businesses. Last month, the company announced a partnership with ClickStream TV to offer no-committment delivery services. “Enabling ClickStreamTV’s pay-as-you-go CDN service is exciting for us, because it enables us to help smaller businesses we might otherwise miss,” Segil said in a press release.

EdgeCast has experienced spectacular growth over the past year. To put it in perspective the company had roughly 300 customers in early 2009, it past the 1,000 mark last September. EdgeCast has relied on a two-pronged marketing strategy: direct selling and a network of resellers. By working with its resell partners, like Deutsche Telekom, Edgecast has been able to expand its sales force without additional overhead costs. The bulk of their customers now come through the resell channel. 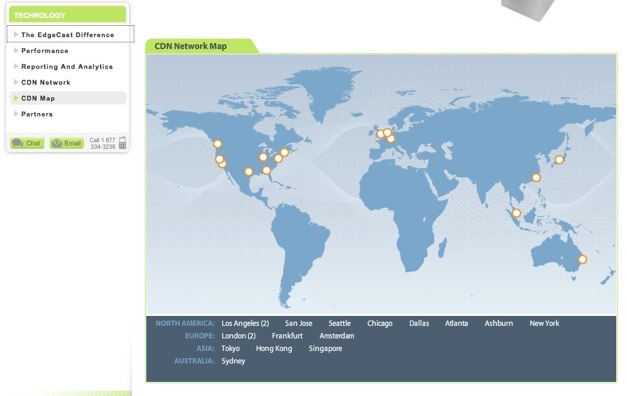