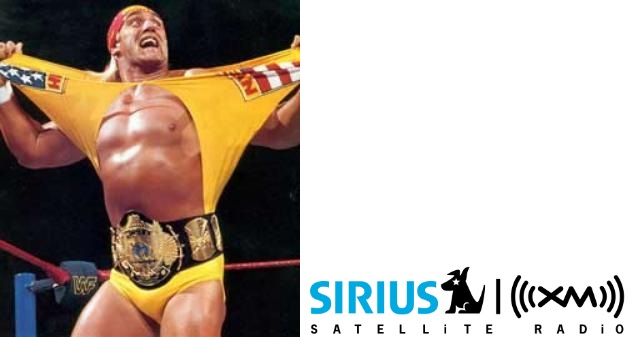 Whatcha gonna do, brother, when you sign a one-year contract with TNA Wrestling, but still want to keep your name in the news? You get a radio show on Sirius XM, of course, dude. That’s right: starting this Monday, you, me, and anyone else with Sirius XM will be able to hear Hulk Hogan—wait, wait, Terry (I forgot, I’m shooting just like they do in TNA)—at 7pm ET on Howard 101. It’s called “Hulk Hogan: Uncensored,” and I’m looking forward to hearing him explain how he wrestled more than 400 days per year back in the 1980s. Yes, he actually claimed that in his latest book. Ridiculous.

It’s a well-known fact that Hogan is good friends with Sirius XM’s Bubba The Love Sponge, someone fans of Opie and Anthony should be familiar with (because he stinks on ice). In fact, Mr. Love Sponge is a recurring character on TNA Wrestling, the wrestling promotion that Hogan hitched his wagon to a few months ago. They’re not doing too great in the ratings, being regularly trounced by WWE on Monday nights on Spike TV. It got so bad that Spike had to move the show, TNA Impact, from the 9-11pm time slot to the 8-10pm time slot, thinking that the one unopposed hour will even out the damage done to the lone opposed (to WWE Monday Night Raw) hour. It’s a good idea, but a better idea would be to go back to Thursday nights. At least that’s cheaper than running live shows ever other week on Mondays.

Hogan isn’t exactly a radio newcomer. He’s a frequent guest on the aforementioned Bubba The Love Sponge Show, and has proven over the past 90 years that, if nothing else, he’s a good talker. A great talker, even. Well, he’s no Ric Flair, but that’s an unfair comparison—nobody is better than Flair on the mic.

Then again, people thought David Lee Roth was a good talker, too, but look how his show on CBS Radio wound up—it wound up dead, that’s what.

The Howard 101 Web site says the show will consist of Hogan “[talking] about his life in and out of the ring.” (It may end up being a permanent deal if it does well, however Sirius XM chooses to measure success here.) The name alone implies that the show has the potential to be interesting—Lord knows he was on the road long enough to have a couple of stories to share with the Howard 101 audience.

I’ll give it a shot. I mean, it’s not like I’m doing anything else Mondays at 7pm.