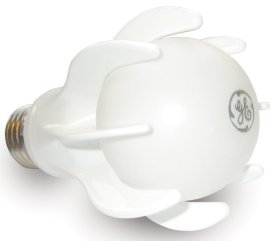 CFL bulbs are great, but the mercury they use can be harmful. LEDs don’t use mercury, but the technology is still pretty rough, and it’s tough to get something that resembles a normal lightbulb from them. There’s been a couple of examples of how LED light can be used as a replacement for normal lighting, but nothing that’s really practical.

GE just announced a new lightbulb that’s going to change all that. The new technology combines the omnidirectional light of a incandescent bulb, and the power savings of and LED. The new bulb is expected to last 17 years before it needs replaced, which is about 25 times longer then a 40w incandescent. There’s a down side to the new bulb though, it’s going to cost between $40 to $50. The new bulb produces 450 lumens, which is the equivalent of a 40w incandescent, or 10w CFL, but the LED will only consume 9w of power. Expect to see the new LED bulb sometime in 2011.