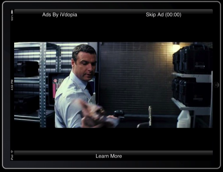 Mobile ad networks and platforms, such as Greystripe, Medialets, Mobclix, Kyte and others, are all jumping on the iPad bandwagon, attempting to take advantage of the potential of the device as an attractive advertising platform. iVdopia, a recently launched iPhone-centric video ad network, is making its debut on the iPad, bringing its high-definition video ads to the device.

iVdopia’s proprietary caching and encoding technology brings high-definition ads to the iPhone, and now the iPad, using mpeg4. iVdopia has created a specific type of social ad format called Talk2Me. These HD video adds allow users to share the ads via Facebook or Twitter, buy tickets or search for nearby movie theaters, all within the ad. iVdopia claims that click-through rates are almost 400% above the average rates.

iVdopia also offers pre-app video adds that run before an app begins and banner ads. iVdopia’s ads have been able to attract a number of high profile advertisers, including Warner Bros. and Coke Zero.

Parent company and online ad network Vdopia launched the mobile offering in March of 2009 and recently raised $4 million in funding from Nexus Venture Partners. iVdopia extended its ads to the Android platform in February.