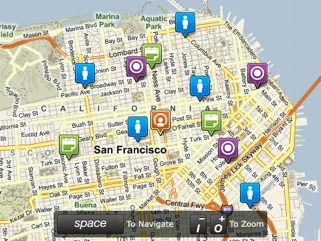 Location-based social network Loopt has just updated its iPhone and BlackBerry applications, adding a hybrid map feature that allows you to view a single map (seen at right) that plots nearby points of interest, friends, and events all at once. The new update also brings LooptPulse, which the company has already launched for the iPhone and iPad, to the BlackBerry.

LooptPulse, which was first announced last fall, is Loopt’s discovery feature. If there are a lot of Loopt users checking in at a nearby event or restaurant, the service will recommend it to you, even if your friends aren’t necessarily there. Loopt generates some of these recommendations using data from its partners like Zagat, CitySearch, Bing, and Tastingtable (recently added partners include SonicLiving, Zvents, and Metromix).

Loopt has been around for much longer than hot location startups like Foursquare and Gowalla, and has more registered users than either of them. But in some senses it’s playing catchup — for years Loopt was a passive service that constantly tracked your location as opposed to the check-in services that have recently caught on. Loopt has now shifted its model to compete more directly with these services, and its Pulse discovery features go beyond what Foursquare currently offers.