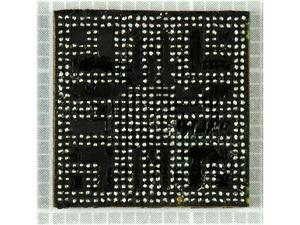 Kyle at iFixit and his buddies at Chipworks straight up tore into the A4 chip that appears in the Apple iPad. The chip is an ARM processor with a small RAM package made by Samsung. The processor itself is made entirely by Apple although it is based mostly on the original Samsung processor made for the iPhone.

Other interesting points include the possibility of an onboard GPU, the same one powering the iPhone, namely the PowerVR SGX 535. This means while the screen is bigger the graphics aren’t much faster. The iPad also has 256MB ram and, most important, the CPU “sips” power.

The A4 sips power. In fact, power consumption is probably the reason Apple hasn’t stepped up performance much from the iPhone. In order to get 10 hours of battery life, the entire iPad (including display) has to pull less than 2.5 Watts on average.

Ah the Internet. One man’s corporate espionage is another man’s blog post.