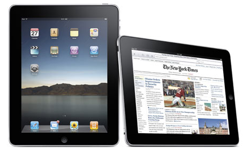 EMG Technology, a company that previously slapped Apple with a patent infringement lawsuit over the iPhone’s browser technology, has announced that it will include the iPad as an additional product in the complaint. EMG’s lawsuit, which was filed against Apple in November of 2008 for “the way the iPhone navigates the Internet,” is still pending in the U.S. District Court for the Eastern District of Texas. The trial date is set for September 12, 2011.

From the initial lawsuit, the patent filed by EMG in 1999 covers methods for reformatting Web pages onto TVs and mobile devices, as well as for manipulating those Web pages using zooming and scrolling techniques. The suit is specifically targeting the touch-screen browser on the iPhone, but it could just as easily apply to any mobile browser, including the one on the iPad . The name of the patent is “Apparatus and method of manipulating a region on a wireless device screen for viewing, zooming and scrolling internet content.”

As we wrote in out initial assessment of the lawsuit, the patents seem quite broad and obvious, making for a weak complaint. Much of the basic technology that EMG alleges Apple stole has been used for decades. But the complaint addresses interactive TV technology, which may have more standing on the iPad.

Last week, Apple was served with a patent infringement lawsuit filed by Taiwanese chip maker Elan Technologies, over the use of multitouch technology in the iPhone, iPod Touch, and iPad. And a few weeks ago, Apple filed a similar patent infringement lawsuit against cell phone manufacturer HTC, involving 20 Apple patents related to the iPhone’s user interface, touch technologies, underlying architecture and hardware. Apple was also involved in similar patent litigation with Nokia. However, that lawsuit is more about Apple trying to get Nokia to license its patents.

It’s still unclear how strong EMG’s lawsuit is against Apple, but legal issues involving patent infringement are messy and complicated for both parties involved, and Apple now has to content with at least two of these nasty complaints.