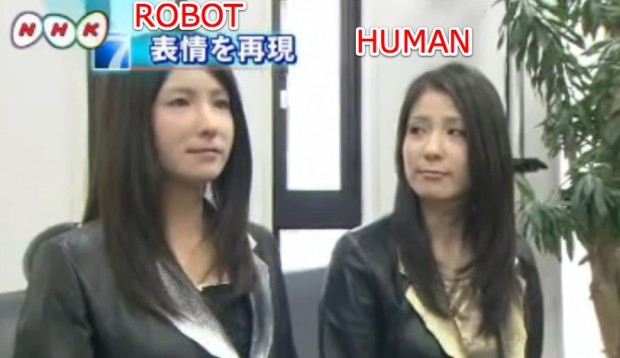 If you still needed evidence Japan is the country churning out the most realistic androids out there, here’s another hint for you. Meet Geminoid-F, the newest robot from one of Japan’s most famous robot makers, Hiroshi Ishiguro. Ishiguro-san’s invention is as realistic as it is creepy, but also very cool.

The android you see on the picture above is a doppelganger of the human model on the right. It mimics the facial movements of human beings through twelve pneumatic actuators, for example by smiling or frowning. The system works via a camera that detects facial expressions coming from the human and sends the data to the robot whose head (based on that data) starts moving like the original.

Professor Ishiguro is planning to commercialize the doppelganger robots, estimating each unit will set you back $110,000.

Here’s a video (in Japanese) showing Geminoid-F in action:

Via Gizmodo via IEEE Spectrum