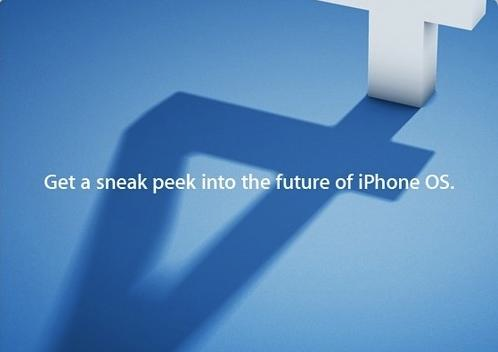 Apple has just sent out invites to press inviting them to a special event on Thursday April 8 where they’ll “Get a sneak peek into the future of iPhone OS”.

The event, which obviously comes just after the launch of the iPad, will showcase the new features coming with the latest release of the iPhone/iPad operating system, giving developers time to plan for and integrate the new features into their apps. There have been rumors for months that this new update will include the ability for certain third party apps to run in the background.

Apple has been holding these developer preview events since before the App Store launched: there was one in March 2008 where the iPhone SDK was announced, and last March Apple gave a preview of the iPhone 3.0 software update. Historically (by which I mean, the last two years) these updates have been released alongside new iPhones in the summer (the iPhone 3G came out July 11 2008; the 3GS was released June 19 2009).