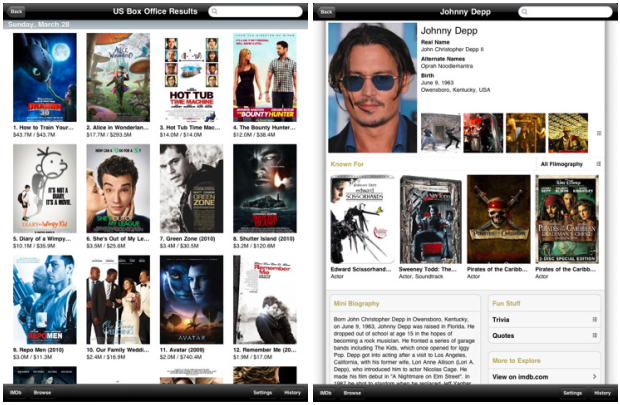 With all the talk about Google and Amazon versus Apple, both Internet companies have been quick to release custom applications for the latter’s freshly launched iPad device.

Amazon.com had already introduced its Kindle app for iPad, and over the weekend announced the second one it added to the stable: an IMDb (Internet Movie Database) app (iTunes link) – it went live on April 1st.

The Amazon.com subsidiary, which offers a ton of information on movies, TV and celebrities, has released a native iPad app to optimize the experience of its iPhone app for the bigger screen. According to the company, the IMDb Movies & TV App for iPad lets customers access more than 1.5 million movie and TV titles with information on 3.2 million celebrities, actors, actresses, directors and crew members.

Users can also use the app to watch movie trailers in HD, find localized movie showtimes in the United States, browse photo galleries and shop for DVD and Blu-ray releases. The app is free of charge – it hasn’t garnered any reviews on iTunes so far.

IMDb’s website welcomes over 57 million unique visitors per month, although it looks and feels incredibly old school to me. No doubt, iPad owners with even the slightest interest in movies, TV or celebrities are going to want this app.

Be sure to check out our complete list of the best iPad apps at launch.