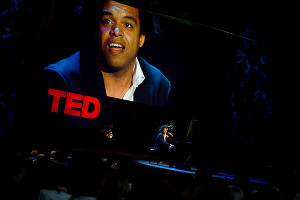 February 2009, and mid-way through the ever–controversial TED conference in Long Beach, California, a pianist called ‘ELEW‘ took to the stage.

Dressed in a black suit and white shirt – cuffs open and flapping at his wrists – he sat in front of a grand piano and prepared to play his version of ‘Going Under’ by Evanescence. Despite the apparently mundane choice of music, the audience had been told to expect something special.

And so it began. For the first full minute of his performance, ELEW didn’t touch a single key. Instead he reached inside the lid and began plucking and jabbing and pounding the piano’s strings. The sound was one that nobody in the auditorium had ever heard before. Even the piano seemed surprised at what it was capable of.

Then came the keys – and with them, ELEW’s transformation from man to – well, something else; his face contorting along with every note: eyes first closed and then bulging, brow furrowed, teeth gritted in a kind of quiet rage — not so much playing the music but beating it into shape. The performance lasted ten minutes; short by ELEW’s standards – he’s been known to play at this pace for an hour or longer – and when it reached its climax the audience gave their verdict. A standing ovation from one of the world’s most hard to please crowds.

In the months that followed, ELEW went from virtual unknown to solid circuit fixture as YouTube clips of his TED performance went viral. For some reason, Silicon Valley became particularly obsessed with his work, and for a few months during the middle of last year, it seemed like you couldn’t attend a tech event in San Francisco without catching a performance by ELEW and his piano. In fact, it was at one such event – a fundraiser for DNA Lounge, organised by Zivity‘s Cyan Bannister – that I first saw him play, and ended up turning over an entire installment of my Guardian column to how I’d been reminded that virtual experiences could never beat the visceral rush of this kind of amazing live performance.

So gushing was the fanboyism of my (I admit, generally somewhat cynical) column that ELEW’s manager asked if I’d expand on it in a short essay that could be used to promote his forthcoming debut album. (Disclosure: I was paid for my time. Although, as you’ll surmise if you read my original column, I’d have gladly given it for free).

So what does this all have to do with TechCrunch? Why – you might very well ask – is this news?

As part of the research for the essay, I spent some time talking to ELEW about his apparent overnight success. What quickly became clear was that – as is almost always the case – there was almost nothing ‘overnight’ about it. But more interestingly, I realized is that ELEW’s story isn’t that of an artist at all. Not really. In fact it’s the story of an entrepreneur. Moreover, it’s a story that offers several valuable lessons for anyone – entrepreneur, artist, or otherwise – who wants to be ridiculously successful in their chosen field.

So, given that I spend half my life talking about my own failures as an entrepreneur, and given that it’s Easter – a holiday celebrating new life and all that crap – it seems appropriate to take a week off from cynicism and shift into inspiration territory. Or perhaps it just seems like a good opportunity to be paid twice for the same research. Feel free to decide in the comments.

Meantime, on with the first lesson…

If you don’t love what you’re doing, do something else

Three years before his TED performance, ELEW didn’t exist. What existed was Eric Lewis; a supernaturally gifted jazz pianist who had won the Thelonious Monk Piano Competition at age 23 and was playing regularly with – amongst other famous names – Wynton Marsalis and the Jazz at Lincoln Central Orchestra. And yet, for all of his accomplishments, Lewis was trapped. His preferred performing style just didn’t fit in the jazz world. “I was less into a swinging form of jazz, and more into a rock form of jazz… but I was attempting to drive myself to exciting heights, while playing behind horn players” he deadpans. “I was called ‘crazy’ and ‘show off’ and all those other cliches. People said I was difficult to work with.” Lewis responds to the criticism with a cliche of his own: “Never try to teach a pig to sing; it frustrates the teacher and annoys the pig.”

Lewis knew that to be successful, he’d have to turn his back on what he had previously been his career for life. So he did.

Think like a chess hustler, or perhaps a Navy Seal

“I’d always believed in the system: work hard, become accomplished and get a record deal with a jazz label, that’s how it was supposed to work.” But it didn’t work. “I realized that the whole system was corrupted, and not in my favor. So I closed my head to that system. It was like breaking up with someone after a long relationship. I completely restructured my reality and started thinking – strictly by numbers – how to survive as a piano player. I looked at people like Kenny G, Dave Sanborn – people who are called ‘heretics’. I looked at what they’d done, but I also applied the thinking of a chess hustler.”

Zugzwang. That’s the word Lewis uses. It’s a German word – literally ‘a compulsion to move’ –  used in chess to describe the point where a player finds that, whatever move he makes, he is going to be at a disadvantage. But while a chess players is trapped within the confines of the board; Lewis realised that there was nothing stopping him from changing his game. “I decided to fully embrace the rockstar ethos they’d tried to remove. And by rockstar ethos I mean what is known in some circles as ‘fun’.”

It was at that point that Lewis stopped thinking like an artist and started thinking like an entrepreneur. Realising that if he wanted to be successful he’d need to turn himself into a brand, he started cramming every branding book he could find; books with salesy names which insist that “it pays to be a winner” – which, Lewis points out, also happens to be one of the slogans of the Navy Seals. To most artists the idea of creating art using the principles of business – let alone those of the Navy Seals – would sound hideous but thinking commercially was what lead Lewis to make two significant decisions.

First was his personal reinvention. Eric Lewis became ELEW, a name which Lewis admits he chose because “there were many Eric Lewises on Google search results, but I was the only ELEW.” The name, though, reflected an entirely new persona: “before then I felt like I’d been hiding my real self under a cloak – just a tease”.

Create a whole new genre for what you do, give it a name, make it your own

The second result of ELEW’s hustler-thinking was the concept of ‘Rockjazz’. “I wanted to be a one man rock band; using the piano to recreate the sound of the electric guitar; the vocals; the bass. Like how Beethoven and Bach were trying to reflect and emulate what they saw.” He pauses. “Except with them, of course, they were trying to emulate bees and things of that nature.”

Lewis acknowledges that others have tried to cover rock music in a jazz style before but “the fact is they didn’t care enough about what they were doing to give it a new name. That says a lot.” This habit amongst jazz musicians of refusing to take rock seriously particularly irked him. “They are too concerned with trying to be clever, adding layers of esoterica that you have to peel away to get to the fun.” With Rockjazz, the fun is first. Indeed – when I talked about ELEW with other professional musicians, all of them took pains to explain how much skill is required to produce his sound. They were concerned that there’s so much fun in ELEW’s music that audiences might not realise how talented he is. They needn’t worry.

Regardless of whether audiences recognise ELEW’s skill, though, they certainly recognise that his style is something they’ve never seen before. Inevitably he’ll attract imitators but that’s fine – when people think of RockJazz, they’ll still think of ELEW.

Work your ass off, learn from the kids, and don’t be afraid to start from the bottom

And so began the process of turning his concept into actual performance, a process that started with a chance encounter and a harsh realization, which will be familiar to every traditional business person who suddenly found their industry threatened by the Internet.

“I met a guy who worked with Coldplay, and he told me ‘we should get you to do a kind a dueling pianos with Chris Martin’. I just stared at him… who is Chris Martin? Who are Coldplay? I literally didn’t know. The guy looked at me like I only had half a brain. But he didn’t budge; didn’t feel the need to explain. Here was me with all my reputation and experience in the jazz world – I’ve played with Cassandra Wilson and Elvin Jones, people like that – and I realised none of it mattered. I thought ‘I’m in the big world now, no one knows who all these jazz people are. I’m away from my jazz world now and I’m back on the bottom.'”

Thus came the harsh realization. “That’s when I knew there was no place for ego anymore, just a three year process of realization. The realization that I suck. Forget audiences saying ‘wow’. No. I suck. My new masters were sixteen-year-olds with guitars. They have their own rules and authority – they have relevant information that I don’t have, and that I needed to learn. It’s their way or the highway. I felt like the 30 year old guy who suddenly has a 19 year old boss. I can either disrespect the guy or I can give him the service and dedication and respect that he deserves. There’s the lyric in Smells Like Teen Spirit: “I found it hard, it’s hard to find / Oh well, whatever, nevermind.” That’s how I felt. I can’t convincingly render surfer rock. Poor Eric… oh well, whatever, nevermind. I had to learn. My hands cramp when I try to play the opening to Lights and Sounds… oh well, whatever nevermind.  These are growing pains. I could quit or I could suffer through the muscle process and learn. And, well we know how that went…”

And so we do. Last May, ELEW accepted an invitation to perform at The White House for the President and First Lady. His album followed a few months later, comprising tracks which, surprisingly given that the only thing missing from ELEW’s performance is vocals, were chosen in large part for how their lyrics reflect his journey. From the Killers’ Mr Brightside – “A song about betrayal… I felt betrayed by the jazz world” – to Easier To Run by Linkin Park – “it is easier to run.. but I knew it would be worth it, and that that we were all going to have fun in the end”, ELEW makes his final lesson clear:

“After years of feeling like a square peg in a round hole, now finally I’ve found where I am. That’s what matters.”