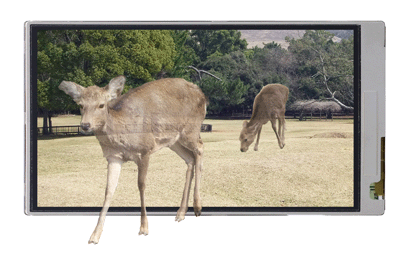 Glasses-free 3D displays for mobile devices are nothing new. Hitachi, for example, started selling a 3D-enabled handset [JP] in Japan as early as last year. The Hitachi product didn’t make much of a splash, but Sharp’s new parallax barrier-based 3D display for mobile devices (which the company announced today) appears to be pretty cool.

The panel Sharp showcased at a press conference in Tokyo for the first time is extremely thin, can switch between regular 2-D and 3-D modes, doesn’t require glasses for viewing images in 3D, and will be available with or without touchscreen capabilities. It features a screen size of 3.4 inches, 480 x 854 resolution, a contrast ratio of 1,000:1, and 500 cd/m2 brightness (Sharp claims the image quality is the best in the industry).

Here’s how the 3D effect works (from the press release):

This parallax barrier, which has a series of vertical slits, is incorporated into an ordinary LCD to control the path of light reaching the right and left eyes, thus creating a sense of depth.

Sharp says their screens will be used for cameras and cell phones, but there is a chance the upcoming Nintendo 3DS will have them, too. This is pure speculation, of course, but Sharp has been providing LCD displays for the Nintendo DS since 2004 (Hitachi joined one year later) – so there is a close relationship between both companies.

Sharp plans to sell both types of the 3D display (touchscreen and conventional) from the first half of fiscal 2010.

Update:
This video (courtesy of DigInfoNews) provides more insight. The Sharp representative in it explains the display can be used for games as well.