While everyone and their dog are introducing their iPad apps to the world, let’s take a look at a company launching something for that other – slightly more open – platform called the World Wide Web.

We profiled Dropico, an easy-to-use drag and drop photo sharing app, before when it was still in private beta and people seemed to dig the concept a lot. Well now, you can try it out for yourself.

When you register for and log on to Dropico, you can select a number of popular services that allow you to share pictures, including Flickr, Facebook, several Twitter photo sharing apps, MySpace, Photobucket, Picasa and more (others can request to be included). When you connect to these services inside the main Dropico interface, you can view your photos and albums in separate frames, but also drag and drop them from one to the other.

Dropico refers to this as a “cloud to cloud” service in the sense that it makes it easy for people to organize their photos and albums across multiple environments from a single location. The company also allows third-party developers to build services on top of its platform – one obvious addition that’s already live is integration with Pixlr for on-the-fly photo editing.

Finally, Dropico also offers a white-labeled version of its platform, which the company says should appeal to storage and printing service providers, and a hosted solution specifically tailored for mobile operators.

Dropico shared a couple of upcoming features with us – the next version will include a stream of photo updates from your friends across different social networking sites and photo sharing services, the ability to selectively share albums with others, and support for drag and drop video and document sharing.

The company is also working on an iPhone client and yes, an application for the iPad.

Give it a whirl and tell us what you think. 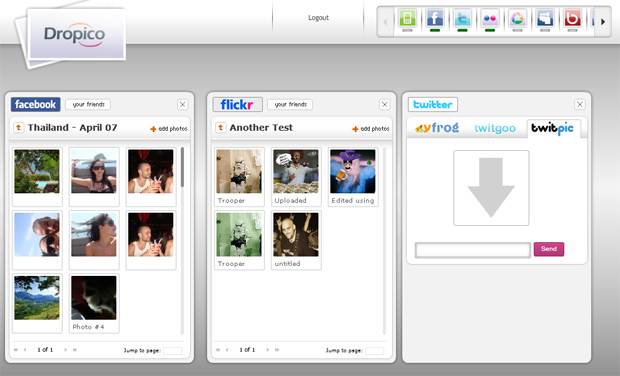