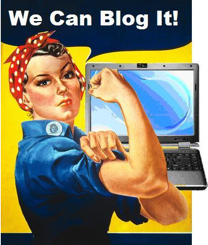 According to a new study released by PR Week and PR Newswire, 52% percent of bloggers surveyed consider themselves journalists. This is an increase from 2009’s study, when just one in three had the same opinion. However, despite this, only 20% of bloggers obtain the majority of their income from their blogs; which is an 4% increase from 2009.

A few other stats caught our attention as well. When it comes to using blogs and social networks, like Twitter or Facebook, for research, 91% of bloggers and 68% of online reporters “always” or “sometimes” use blogs for research. But only 35% of newspaper and 38% of print magazine journalists surveyed use blogs or social networks for research purposes

The stats are even more interesting when it comes to using Twitter, which is often a place for breaking news and consumer trends, alone for research. 64% of bloggers and 36% of online reporters said they use Twitter as a research tool for stories. But only 19% of newspaper reporters and 17% of print magazine reporters use the microblogging network as a resource for research. Newspaper and print magazine reporters also source Twitter less frequently than their online counterparts with 19% and 22% saying they have used a Twitter post in a story, respectively. This is in contrast the higher use of sourcing Twitter for stories for bloggers (55%), online magazine/news (42%) and even TV news (48%).

Here at TechCrunch, we rely on other blogs for research even more than traditional news outlets. And we use Twitter as a tool not just for breaking news, but also to evaluate the sentiment of consumers about a particular product or service. For example, my colleague MG Siegler used the breaking news of Tiger Woods’ car accident to show the inherent value of Twitter when it comes to the speed of reporting news.