RethinkDB, the startup that’s looking to provide a MySQL storage engine that’s been built from the ground up for solid-state drives, has closed a $1.2 million seed funding round. The roster of investors taking part in the round is impressive: Highland Capital Partners, Avalon Ventures, Andreessen Horowitz, and Charles River Ventures are all participating. Angel investors in the round include Brian Pokorny (formerly of SV Angel and now CEO of DailyBooth), FriendFeed founder Paul Buchheit, Udi Manber (a Google VP who is in charge of the company’s all-important core search offerings), YouTube founder Steve Chen, Russell Siegelman, angel investor and previously a partner at KPCB, and Dave Pell. RethinkDB had previously taken early funding as part of last summer’s Y Combinator program.

Solid-state drives — the kind of disk that you’ll find in your iPhone —  likely represent the future of storage. Not only do SSDs do away with the moving parts associated with traditional platter based drives; they’re also fast. RethinkDB is looking to be at the head of the curve by offering a fully optimized MySQL storage engine that takes advantage of the benefits offered by SSDs. Among the features listed on their site: append-only algorithms, lock-free concurrency, and live schema changes (you can see more technical details here).

There’s obviously risk involved with trying to (this seems like the sort of thing that will either never gain traction or become very successful), and the company’s strong roster of investors represents a big vote of confidence. Update: Actually, as the comments point out, RethinkDB is meant to be easy to deploy. RethinkDB plans to use the new funding to add developers to its still-small team. 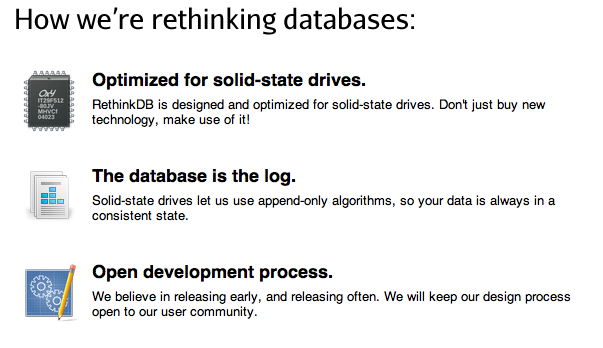