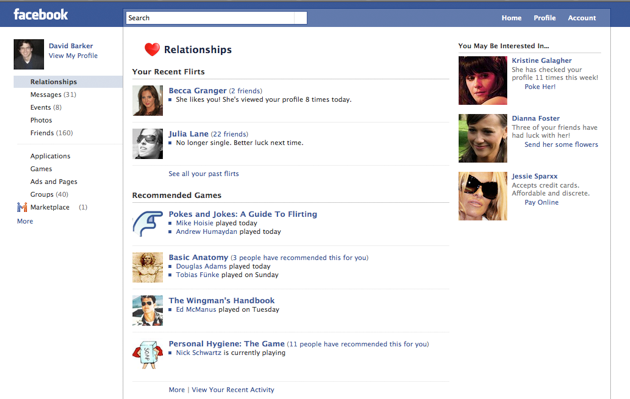 Later this month Facebook is holding its f8 conference, where it will be launching a slew of new features (we’ve already broken the news on quite a few of them). Tonight, the company has written a blog post announcing what is perhaps the most ambitious and creepy of them all: Facebook is looking to get into the dating game, and it’s turning to Zynga for help.

The gist of the new product? Dubbed ‘Relationships’, Facebook is going to soon offer a section of the site dedicated to helping users meet potential romantic partners. To do that, the company has been working with Zynga over the last four months to develop games that “synthesize romance and foster relationships through social gaming mechanics”, helping users flirt and get to know each other using Farmville-like games to help break the ice.

In the post, Facebook says that it will look at the profiles of your previous boyfriends/girlfriends to determine the personality traits you’re attracted to most, and that it will also use advanced photographic analysis to figure out your preferred facial structure and body type. In an attempt to quell privacy concerns before they begin, Facebook notes that all of this is done automatically, and that at no point are employees allowed to view these reports on your innermost psyche. How reassuring.

The site appears to be broken up into three sections: at the top is a section for ‘Flirts’, which displays the Facebook friends you’ve been interacting with most. In a move certain to cause riots, Facebook is now allowing users to keep tabs on how many times each of their friends has visited their profile. Facebook claims that this will make it easier to figure out who is lusting after you, and that “shadier” visitors will simply learn not to be so creepy. Below this is a section for games and lessons. These appear to be the Zynga-designed apps, which cover everything from flirting to lessons on hygiene. 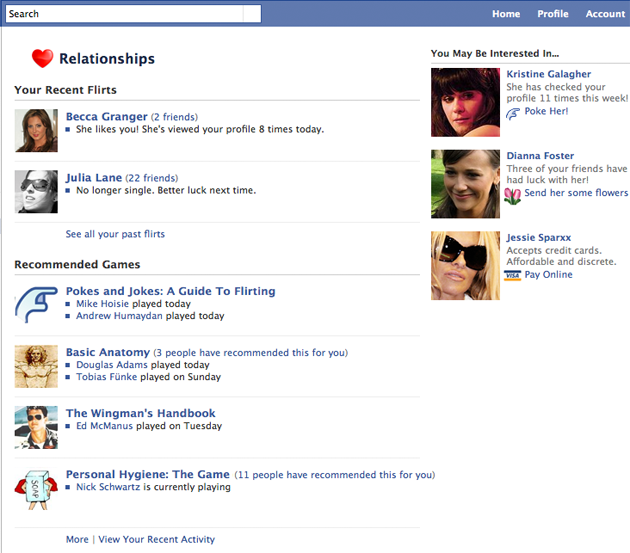 Finally, there’s a ‘Recent Dates’ section. It’s unclear exactly what this is for, but there’s a Facebook-branded baseball diamond that apparently prompts users to share “how far” they got on their recent dates to their friends’ News Feeds. Given how much these definitions have shifted over the years, this could get messy. 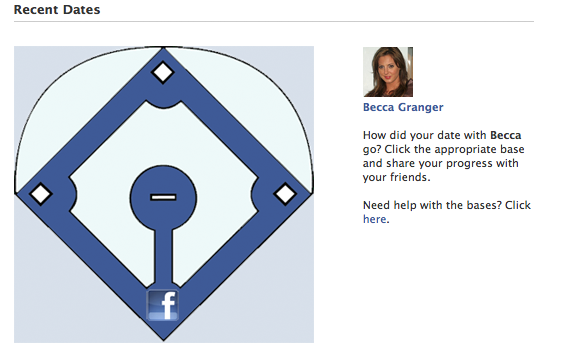 Perhaps most interesting is the fact that the new Relationships feature belongs to a new (and somewhat sinister sounding) ongoing initiative that Facebook is internally calling The 6.8 Project. The name, which is an allusion to Earth’s total population of 6.8 billion people, is meant to symbolize Facebook’s goal of connecting everyone on the planet. The concern is that that may not be enough.

Facebook has grown so quickly over the last few years that the company is worried that its long-term expansion potential over the next decade is limited. At its current growth rate, Facebook will have saturated the market of Internet-using humans in seven years. So — to put things bluntly — they’re looking to encourage current users to procreate, though they’ve only said as much with cutesy euphemisms.

Facebook wouldn’t comment on its future plans for the 6.8 Project, but we hear that the company intends to launch a ‘Babybook’ directory for children up for adoption, and there are also discussions about lowering Facebook’s minimum age to five years old.

“Over the last six years, Facebook has been embraced by over 400 million people around the world — and we’re still growing. During that time, our engineers have managed to overcome some truly monumental hurdles, empowering friends and families to share their photos, videos, and thoughts with the people they care about.

But there’s still one fundamental human need that we haven’t yet been able to take care of, and ironically enough it’s the primary reason people log on to Facebook every day. It goes by many names: Love. Romance. Great White Buffalo. Call it what you will, it’s something that all of us are looking for. We hope to help you find it with Facebook Relationships.

We look forward to sharing more details about the new feature at this month’s f8 conference. With Relationships, we’re going to take your friendships to the next level.