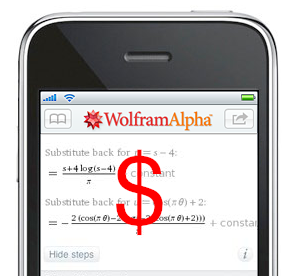 For the past several months, I’ve given WolframAlpha a hard time. I actually think the service is pretty cool, I just think they drastically overpriced their iPhone app. The computational engine was trying to get users to pay $50 for the information they could access for free online. Sure, there’s something to be said for an iPhone -tailored experience, but $50 was just ridiculous. And guess who now agrees? WolframAlpha.

The service has slashed — and I do mean slashed — the price of the app from $49.99 all the way down to $1.99. Yes, they’ve discounted it $48. That’s a 96% price reduction. And not just that — they’re offering a refund to anyone who did pay the ridiculous price for the app. Yes, a full refund — and Apple is keeping their 30%, so WolframAlpha is losing money by doing this.

Between the $49.99 version and the $19.99 discounted version that was on sale during the holidays, 10,000 copies of the app were sold, we’re told. That’s not awful, but it’s nowhere near the number WolframAlpha needs to be ubiquitous. And that’s exactly what WolframAlpha has decided it wants to be.

The $1.99 price will certainly help towards that goal, but so will the reinstatement of the mobile-optimized version of the site. You may recall that WolframAlpha took that version away in December, erroneously thinking people would buy the $50 app without it. Now, it’s back too.

More changes to make WolframAlpha appeal to all sorts of people will be coming too, we’re told.

For now, check out the handsomely-priced $1.99 app.