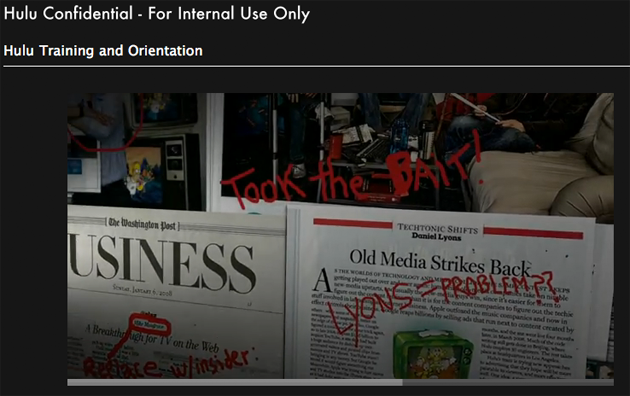 If you head over to Hulu right now and start watching a video, you’ll notice that the site has turned on a new 3D feature. At least, it looks like they were trying to — when you click the button, the site instead opens a video marked “Hulu Confidential — For Internal Use Only” (looks like there’s a pretty major typo in their code).

The video is a ten minute documentary detailing the long-running conspiracy behind Hulu’s alien plot to turn our brains into goo. It begins with footage of television pioneer Philo Farnsworth (an alien-sounding name, indeed), winds through the 20th century, and concludes with Hulu, which finally helped TV’s brain-melting content expand its reach well beyond the living room.

The documentary includes interviews with UCLA Professor Fabian Wagmister and journalist/comedian Dan Lyons (AKA Fake Steve Jobs). Lyons sums up Hulu’s impact on our future best: “Our children are going to grow up to be total, mushbrained zombies. There’s no hope for them.”