Over the last few months we’ve seen quite a few international startups that are looking to capitalize on the success of Groupon, the deal-a-day startup that has been getting quite a bit of buzz lately. Europe has already seen many similar sites, and tonight, Brazil is getting its due: Peixe Urbano (which means “Urban Fish” in Portuguese) has just launched to the public, offering daily deals to Brazil’s nearly 70 million Internet users.

Founder Julio Vasconcellos concedes that Peixe Urbano has many similarities to Groupon — it sends users one great deal per day (generally offering 50-90% off) via Email, Twitter, or Facebook. And, like Groupon, a certain number of people have to sign up for the deal before it “activates”, which gives users an incentive to tell their friends. But Vasconcellos says that he and co-founder Alex Tabor have made some key changes to better adapt the new site to Brazilian culture.

While both founders are from Brazil, they decided to do some market research to get a more accurate measure of how they should diverge from Groupon’s model. Their conclusions: first, Vasconcellos says that Brazilians tend to favor spontaneous activities as opposed to discounts or gift cards with a six month expiration, so Peixe Urbano will include more time-sensitive deals, like cheap tickets for next-day shows or happy hour at the local restaurant. Second, Vasconcellos says that Brazilians tend to be less excited about sharing coupons and sales with their friends (they may be frowned upon socially), so Peixe Urbano is positioning itself as a site to discover cool hidden gems in your city, with the added bonus of saving some money in the process.

Other international Groupon-like we’ve covered include Snippa(UK), Daily Deal(Germany), and CityDeal(Germany). And there are plenty more — the UK alone has at least a half dozen Groupon clones. 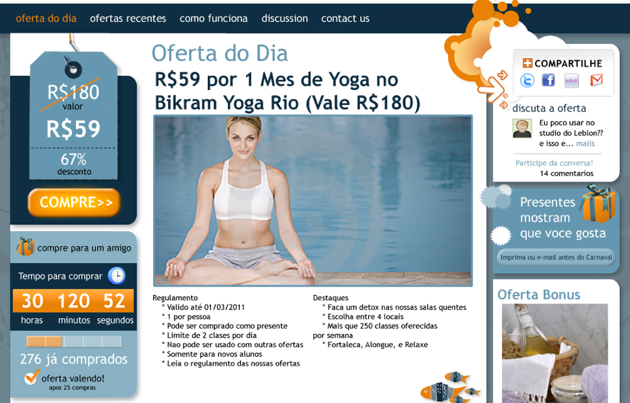