App store analytics startup Distimo is diversifying its business model and broadening its current offering of reports for operators and handset manufacturers with a new product dubbed Monitor. This solution enables mobile application developers to collect and analyze relevant statistics about their works across app stores.

Bonus points for not charging and not requiring developers to insert custom code in their apps.

The Distimo Monitor dashboard provides developers with a dashboard that includes the total daily downloads, revenues and global rankings worldwide of their applications, and aims to do this for most popular mobile app stores in the near future.

For now, statistics are limited to Apple’s App Store and Android Market, but from what I can gather the service will soon be extended to include tailored reports for BlackBerry App World, Nokia Ovi Store, Palm App Catalog and Windows Marketplace for Mobile, as well as mobile operator and independent stores such as Verizon VCast and GetJar.

What I like about the tool is that it allows developers to not only track their own applications but also gain some insights into how well they stack up against their competitors, regardless of which country they target. Developers can use such knowledge to adjust pricing and distribution channels to maximize the growth and revenue streams of their own apps. 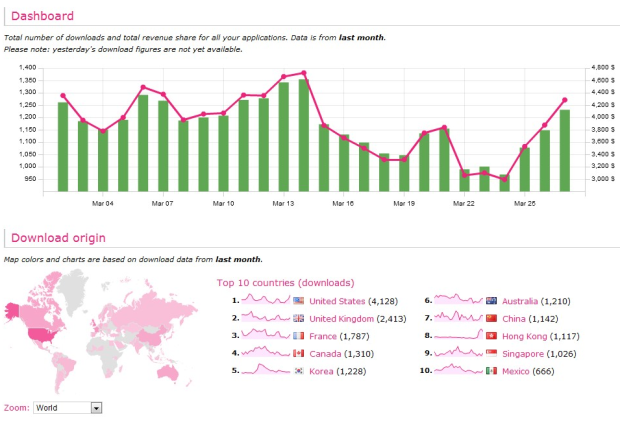