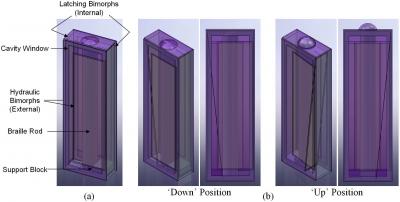 Researchers at North Carolina State Univeristy have created a method to allow for full screen electronic Braille displays. Current Braille displays show one line at a time, severely limiting the value of the display. This will create a matrix of Braille readouts on a larger scale.

The researchers have developed a concept called a “hydraulic and latching mechanism,” which would allow the development of such a display system. The mechanism would be made of an electroactive polymer that is very resilient and inexpensive, when compared to current Braille display technologies. “This material will allow us to raise dots to the correct height, so they can be read,” says Dr. Peichun Yang, a postdoctoral research associate at NC State and co-author of the paper. “Once the dots are raised, a latching mechanism would support the weight being applied by a person’s fingers as the dots are read. The material also responds quickly, allowing a reader to scroll through a document or Web site quickly.”

Thoe whole system sounds very steampunk with tiny Braille pixels (brixels?) popping up and down in rapid succession. However, it could allow for more interesting and richer text interfaces for the blind. One researcher, David Winick, wrote “The last 20 years of computer technology have been relatively inaccessible – and today’s common mobile computing devices, from smart-phones to digital navigators and iPads, have been completely nonexistent – to blind people, because the display technology for the blind has not kept pace.”