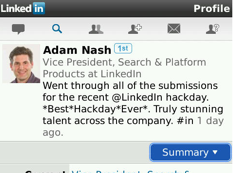 As a professional social network, LinkedIn hasn’t ignored the mobile interests of its 60 million plus users. The company has consistently updated its sleek iPhone app, recently launching a new version. Last fall, LinkedIn announced that a powerful BlackBerry app would be on its way. And the app is an important connector to the enterprise crowd, which generally tend to use BlackBerry devices. Tonight, the new app officially launches. You can download the app here.

The LinkedIn app for BlackBerry is as feature-rich as its iPhone cousin. You can visualize your feed of network updates, search across direct connections and the entire LinkedIn network, access any of your connections to get get profile information, and message contacts. You can also access your LinkedIn inbox, send and accept invitations and see all of your messages. And the app will suggest new connections to you.

LinkedIn has been working with RIM to develop a native application that leverages the phone’s technologies. Users can integrate their LinkedIn connections with their devices’ address book, and view the profile of any contact directly on a device. LinkedIn invitations and messages will show up in the BlackBerry device’s inbox. Users can also view the LinkedIn profile of the sender of any email they receive. And users can view the LinkedIn profile of an attendee of a meeting on their BlackBerry devices’ calendar.

There’s no doubt that the LinkedIn app for BlackBerry will be popular; especially considering the significant use of the device in professional environments. LinkedIn has been consistently upgrading its platform over the past few months, adding two-way integration with Twitter as well as opening up its API to developers. LinkedIn also recently unveiled a significant integration with Microsoft Outlook, allowing users to access parts of their LinkedIn accounts from Outlook.