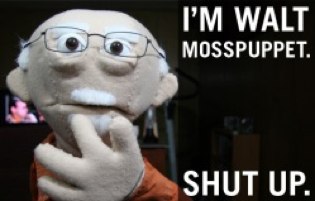 The rumor circulating around Silicon Valley yesterday: Walt Mosspuppet, the foul-mouthed and funny puppet version of the Wall Street Journal’s Walt Mossberg, is actually the brainchild of Newsweek’s Dan Lyons, AKA Fake Steve Jobs. Lyons, says the rumor, actually writes the scripts for all of the videos, and Brian Hogg acts them out with the puppet.

The fact that Lyons promotes many of the Mosspuppet videos on Fake Steve certainly suggests a strong connection.

The truth, at least according to Dan Lyons (I think I was talking to Dan, but it may have been Fake Steve. I’m never sure with him): Not true. Lyons says he helped Hogg with some of the early scripts and has advised him to shorten the videos, but other than that he’s just a fan.

“Never, Mike. Never.” He added “If I was writing the scripts to Mosspuppet, they’d be a lot funnier.”

So there you have it.