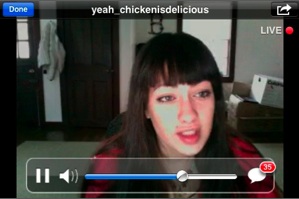 Video streaming apps on the iPhone in the U.S. have always had to contend with the limitations of AT&T’s data network. For a long time, video streaming apps were not allowed in the App Store. And when they did finally get approved, at first they could only stream videos via WiFi.

As AT&T slowly beefs up its data network, iPhone apps can now deliver streams over 3G. But network availability is still an issue, so much so that Apple is now requiring that video watching apps support multiple streaming bitrates before it will approve an app. At least that was the case for Justin.tv’s iPhone video app, which hit the App Store earlier this week. During the approval process, Justin.tv was asked to incorporate both high-quality (200 kbps) and low-quality (64 kbps) streams. The video switches to a low-quality when the 3G network is overloaded or only the slower EDGE network is available (which renders any video painful to watch no matter what the bitrate).

“We were a bit confused by this request at the time, as none of the other live video applications in the App Store had that feature,” reports Justin.tv marketing VP Evan Solomon. “Apple was very adamant that we add it—they wouldn’t approve our app without it,” he adds.

Apple is increasingly encouraging developers of video apps to include adaptive bitrates which vary based on the user’s connection. Currently Apple requires all long-form video (which includes live streams and anything over 10 minutes) to support low and high quality streams. But eventually Apple will likely start to enforce this policy for all videos and video apps, no matter what the length. Already at least one online video platform, Brightcove, dynamically adjusts the streaming rates when it detects a video request from an iPhone app. So it is becoming more of an industry practice. Now it looks like Apple is starting to reinforce that practice through the App Store approval process as well.