YouTube EDU, the video portal’s collection of university and college content contributed by schools around the world, launched a year ago today. To commemorate the occasion, the YouTube team has shared some stats about the initiative.

Since launching, YouTube has grown to include content from 300 colleges and universities, spanning 10 countries and seven languages. The collection has grown to 65,000 videos, including 350 full courses. And with the addition of auto-captioning, the site can automatically translate any lectures spoken in English to other languages.

Another major player in distributing educational content online is iTunes U, which boasts 600 university partners and “250,000 free lectures, videos, films, and other resources”. The programs do have some differences though — for one, schools on iTunes U can restrict the ability of their content to students (around half of them have share their content publicly), whereas YouTube videos are generally available to everyone. 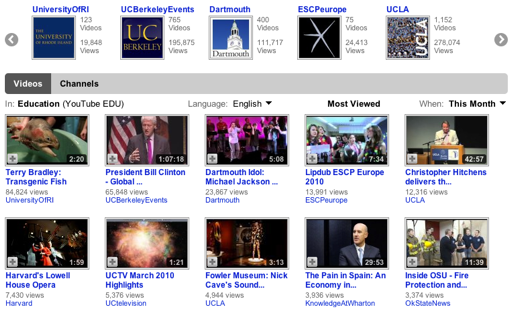