The problem with having more than a million followers on Twitter, or even more than 1,000, is that you don’t really know who they are. But Hunch thinks it knows a lot about the followers of at least popular Twitter users. It is now pulling together detailed psychographic profiles of those followers with a new Twitter Followers tool.

For instance, Hunch suggests that if you follow TechCrunch on Twitter—as close to 1.4 million of you do—you are more likely to be entrepreneurial, very experienced in your career, and talk about computers “like a gear head talking about a four-barrel V8 engine.”

It also predicts that you are more likely to have bought someone flowers in the past 6 months, get birthday cakes from expensive bakeries, and are an optimist (if you drop a piece of toast you believe it will land butter-side up). I’ve met some of you, and I’m not so sure you’d buy anyone an expensive cake. But some of the other characterizations seem spot on.

Hunch is using this Twitter follower analyzer as a clever way to get more people to check out its taste recommendation engine. Any question-answer pair can be Tweeted out with a link back to the full analysis. It only works right now for Twitter accounts with more than 1,000 followers (to keep everything anonymous). Hunch looks at the overlap between those followers and its own users, who have already answered dozens of taste-related questions, and extrapolates from there. This is slightly different from the Twitter Predictor game it released last week which predicts how you will answer a set of questions based on your Twitter profile and who you follow.

Breaking down the psychographics and predilections of someone’s Twitter followers could be useful one day if anyone ever figures out how to advertise to those followers in a way that doesn’t make them want to unfollow you. But for now it is just a fun exercise.

How accurate is it? Let’s put it to the test. My personal followers for @erickschonfeld on Twitter, according to Hunch, tend to be early adopters of of technology (check), use an iPhone (probably), don’t wait for the crosswalk sign to change before they cross the street (I’m pretty sure that’s true), prefer fluid and flexible jobs (check), and consider a “reasonable number of hours to work” to be “whatever it takes” (yup, that’s how my posse rolls).

Looking at some other media accounts, followers of the HuffingtonPost tend to be liberals (I am as shocked), think Bill Maher is funny (which might be their real problem), and don’t realize Elton John can be cheesy . Gawker followers tend to be more “conceptual” than “factual” (draw your own conclusions). Lance Armstrong’s followers are “extremely” competitive and “don’t like kittens” (no idea). While Jimmy Fallon’s followers are more likely to have been in a car accident. I couldn’t make these up if I tried.

Hunch plans to follow up with another Twitter tool where it will try to tell you what kinds of things, people, or products you might like or dislike, as opposed to your followers. It will only be visible to you after you sign in via your Twitter account. To learn more about Hunch’s approach to creating a “taste graph” of its users, check out this recent video interview with co-founder Caterina Fake. 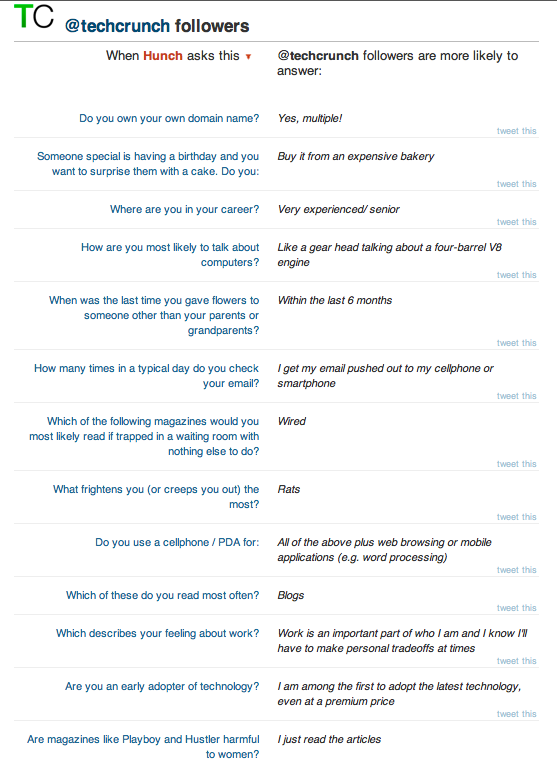