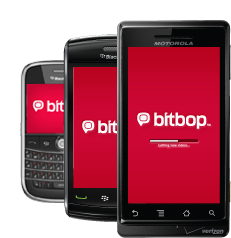 Fox Mobile Group, a division of News Corp’s Digital Media Group, is set to announce a new wireless video subscription service at CTIA later today. Dubbed Bitbop, the service will allow people to view premium video content on their smartphones for $9.99 a month.

As GigaOM called it, you can think of the new offering is a Hulu on-the-go. Bitbop users will be able to both stream and download movies or other video content on-demand from their mobile devices over Wi-Fi or 3G alike.

An actual launch date hasn’t been announced yet, but according to the Bitbop placeholder website the service will be making its U.S. debut this Spring.

Fox Mobile says the Bitbop service will work on “most advanced technology handsets” with “nearly every major telecommunication carrier”. In addition, the company said subscribers can expect to able to stream or download content from Fox but also a range of content partners. According to GigaOM, partners will include NBC Universal and Discovery, along with a number of unannounced content owners.

Our smartphones are ready for mobile TV and video streaming on the go, and content providers are placing bets on us opening up our wallets for it. Million dollar question is: will the carriers’ networks be able to cope with the bandwidth requirements?