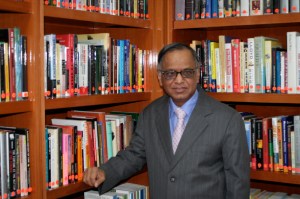 During my recent trip to India, I flew down to Bangalore for one reason: To meet N.R. Narayana Murthy. Murthy is the co-founder, executive chairman and former CEO for 21 years of Infosys, the first Indian company to go public on Nasdaq and effectively the company that began the $30 billion Indian IT outsourcing market.

Murthy’s idea was so successful that it quickly became controversial—not only within the United States where some Americans feel Indians are “stealing jobs,” but also in India where many are concerned about a tech economy that doesn’t make anything. I wanted to meet with Murthy, because in many ways he’s the best person to address what Indians at home and abroad are facing and where Indian entrepreneurship goes from here.

Here are a few highlights from our meeting:

His Day Job. Murthy thought he was stepping down from Infosys back in 2002, but he couldn’t fully let go. As such, he still works pretty much full time for the company, traveling to meet with customers and running a lot of the company’s mentoring and training programs. The more surprising aspect of his job: He personally signs off on the architecture of every building on each one of Infosys’ campuses that employ some 17,000 people around the world. The one we were sitting in was spread of eight acres and had some remarkable buildings, including one that looked like the Luxor casino in Las Vegas.

I asked why this was a top priority—after all, many Valley campuses are plush but from an architecture standpoint look about the same. He said when GE and other American multinationals were starting to come into his business everyone thought Infosys would lose the local talent war. So Murthy studied why people want to work at a particular place. One of the results was the comfort and design of the facilities. That was in 1994 when Infosys was designing the very building we were sitting in as we had this conversation. “I’ve been in charge of every building since– all over the world,” he says.

Hurting or Helping Local Entrepreneurship? Given exactly how plush Murthy and his colleagues have worked to make Infosys, has he indirectly hurt Bangalore’s entrepreneurship scene by making the risk of leaving so daunting? He smiled when I asked this and said, “We may have unwittingly. But I do feel like the spirit of entrepreneurship is alive and kicking in Bangalore.”

Further, I asked about Bangalore’s Zippo-flipping, free-spending generation of young techies who’ve graduated to a huge wave of multinational jobs that pay them far more than their parents ever made, in many cases more than the rest of their families combined. Murthy didn’t deny that that instant-gratification, “gimmie” contingent was strong in the city he helped build, economically speaking. But he blames the Internet and the mass-cross-pollination of Western pop culture, not the bigger paycheck from companies like his.

“We are moving towards a uniform, global culture with an intense competitive spirit and an intense desire for instant gratification,” he says. “But I have a firm belief that each generation is better than the previous one. The Indian entrepreneurs today are more daring than we were.” (This from a man who became a capitalist after after hitchhiking across communist Eastern Europe and getting thrown in jail for chatting up someone’s girlfriend on a train. “More daring” is a tall order, young Indian techies.)

Is India’s Tech Community Too Addicted to Services? Clearly, services has been a great business for Infosys and the hundreds of dollar-millionaires and even more rupee-millionaires that the company’s generous stock program has created. But a lot of Indian CEOs and investors complain that in most cases services-based tech businesses are a great way to get revenues quick, but not a way to build a huge, high-growth business. There’s a big question of whether India’s tech sector has a worrying lack of product-building know-how.

Murthy says it’s a progression. “India missed the industrial revolution, but Indians had intelligence,” he says. “We had to make do with pen and paper. We were always forced to look at the abstract. What is happening in India today is the creation of jobs. Let’s create jobs as long as they are legal and ethical, it doesn’t matter, as long as we make money. The time will come for creating products. I wouldn’t lose sleep over this. If we create enough jobs we’ll raise the confidence of the youngsters and they’ll create products.”

India’s Infrastructure. Here’s something it’s hard for even Murthy to be upbeat about: India’s shoddy physical infrastructure. Murthy has traveled the world and it’s frustrating that so much money has poured into the country he loves, and yet, the infrastructure is still so shockingly bad.

There is progress—Infosys for instance has benefited from a new overpass that cuts down on the drive to the campus by more than thirty minutes. (See!) But it’s not moving nearly fast enough, he says. “I don’t know if we will reach the level of the United States or China,” he adds.

Murthy gave a more nuanced explanation than the usual “it’s corruption” answer you get in India. He explained that 65% of India’s population lives in rural areas and 35% live in cities. And there’s such polarity between the quality of life that politicians have to appear to be doing more for the villages than the cities if they want to get re-elected. That leaves prosperous economic cities blighted by poor sewage systems, pollution spewing generators and beggars weaving through traffic tapping on car windows. “Different emerging nations take different paths,” he says. “In China, they chose to emphasize giving people economic freedom first and political freedom second. In India we chose the opposite path.”

Hurting or Helping US-based Indians? All you have to do is read the comments on one of Vivek Wadhwa’s posts to see the ugly, anti-immigrant, anti-Indian fervor that’s been whipped up in America, post-recession. A lot of it has to do with outsourcing. I asked Murthy if he felt his company and industry’s huge success has indirectly made life harder for Indian-Americans. He turned the blame on xenophobes like Lou Dobbs and grandstanding politicians who use the wedge issue to get viewers and votes.

But it’s an issue he has to address a lot. He answers it by saying every morning he gets up and gets a Pepsi out of his GE Fridge and drives his American car to work where he sits down at his Dell computer. India used to have companies that made soft drinks, refrigerators, cars and computers. But the American ones were better. Allowing them in hurt Indian workers in the short term, but provided a far better quality of life for a much bigger swath of Indians long term. He argues outsourcing has done the same thing for US companies. Greater efficiencies and cost-savings enables these companies to stay competitive and there’s no reason they can’t—in theory—plow those savings into better local jobs or job training.

This argument isn’t going to pacify hate-mongers, because nothing will. Murthy knows that too and while he regrets it, he seems to accept it as reality.

Advice for Entrepreneurs. Murthy has started a $170 million venture fund, so although he spends most of his time still at Infosys, he clearly cares about encouraging the next generation of entrepreneurs. He had two big pieces of advice for them. One, be able to articulate what you do in one sentence. If you can’t, you don’t have a good idea. And two, make sure the market is ready. Businesses are killed, not congratulated, for being ahead of their time.