Last month we wrote about Crocodoc, a new Y Combinator-funded company that makes it very easy to upload a text document or PowerPoint deck and mark it up online to share with your colleagues. Unfortunately, it was also pretty bare boned — you couldn’t even save your edited document to your hard drive. Today, that’s changing: Crocodoc has rolled out some key new features (including the ability to save) that make the service significantly more flexible, and also pits it more directly against Adobe’s Acrobat Pro.

Aside from the ability to save to PDF, the new version includes a freehand pen tool, a tool to convert any website to PDF (which you can then add notes to), and a new API. In a few days, the company will be releasing its application on Google’s recently-launched App Marketplace. The service will also be rolling out a Flash-based embeddable document viewer (similar to what you’ll find on DocStoc and Scribd) that lets you both view and mark up embedded documents.

CEO Ryan Damico says that these features make Crocodoc more competitive with Adobe’s $400 Acrobat Pro software because the free Acrobat Reader most people have doesn’t allow them to mark up and save their documents (personally, I’ve been avoiding any software with the word ‘Acrobat’ in its title for years). Damico does acknowledge that there are still plenty of premium features that Crocodoc doesn’t have that Adobe’s paid software does, but says that this basic editing/saving functionality is what most people are after, anyway. Damico says that in the long term, Crocodoc is hoping to “do to Acrobat what Gmail did to Outlook” by taking a widely used desktop application and bringing it online. 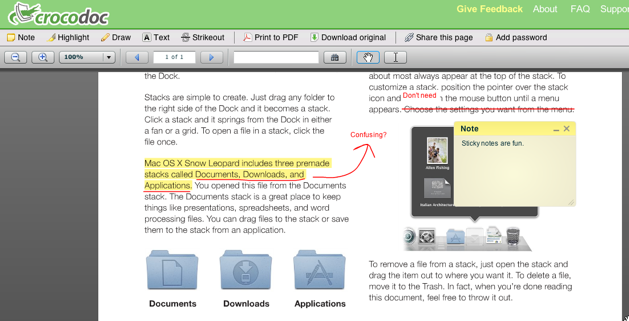