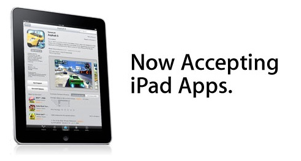 There are only two weeks left until the iPad’s April 3 launch date, and Apple has just started reaching out to developers to say that they’re accepting applications that were developed specifically for the device. We’ve included the Email below. The key takeaway: If you’re looking to have your app available at launch, you need to submit it by March 27, at which point Apple’s team will let you know if your application is ready for the grand opening.

The first few weeks after the iPad is released will be a huge gold rush opportunity, as users look to try out the device’s large screen for the first time. In short, if you can make it to one of the App Store’s ‘top apps’ lists, you’ll likely do very well for yourself. The only problem is that the vast majority of developers have never had access to an actual iPad — they’re all working off of emulators, save for a handful of extremely lucky developers who literally have their iPads chained to a desk. Developers can tweak their applications all they want on their computer monitors, but until they’ve actually gotten to try it out for themselves, they’ll have a hard time figuring out if their apps feel right.

I expect most developers will scramble to submit what they have by March 27, and that we’ll then see numerous updates immediately afterward as developers tweak button placement and other interface elements. Some developers may choose to simply wait until they have a device in their hands so that they can try out their apps before submitting, but the App Store’s discoverability issues make this a risky move (of course, given the hundreds or thousands of applications that will launch alongside the iPad, there’s no guarantee that you’ll get noticed on launch day, either).

Keep in mind that users will also be able to use scaled-up versions of iPhone applications on their iPads. Given the choice, though, there’s little doubt they’ll choose a native iPad app over an iPhone app every time. 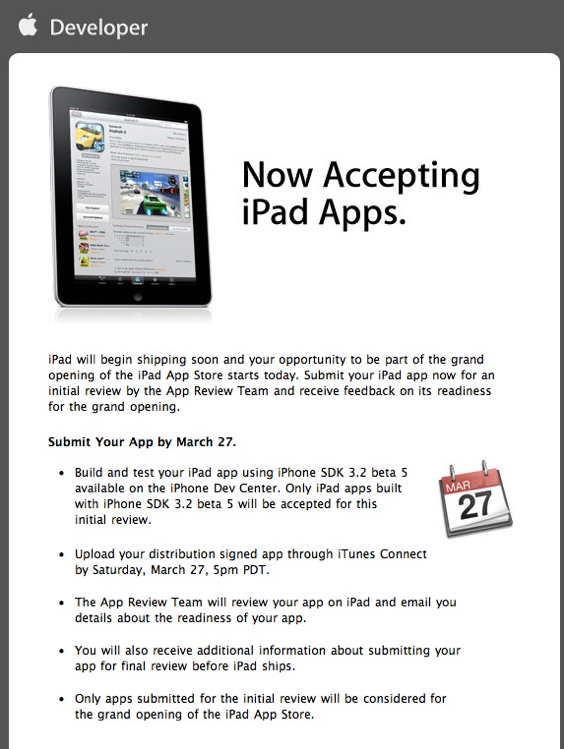