Every year, we come across dozens of new applications looking to capitalize on March Madness, when millions of basketball fans across the country try to predict the outcome of the heated 65-team NCAA tournament. One new app that’s launching today is called tweetBracket, which gives users an extremely easy way to share their picks with their Twitter followers. The application, while basic, is notable because it’s a preview of the technology being built by a Y Combinator startup called 140bets.

Using tweetBracket is simple. You sign in to Twitter using oAuth, and are presented with a random matchup from today’s games. Click the team you think will win, optionally tweet your choice to your followers, and repeat. The game keeps track of your picks throughout the tournament, and prizes are being awarded to the people with the most correct predictions for each round.

tweetBracket is built off of the platform that 140bets is currently developing, which makes it easy to build apps around a binary interface (the company has also put together a similar app for American Idol fans called Tweet Idol). CEO Jason Wilk says that the platform is still early in development, but that eventually it will be used for more real-time interaction (for example, you might keep it open as you watch a game and predict whether or not a player is going to make the free throw he’s about to take). 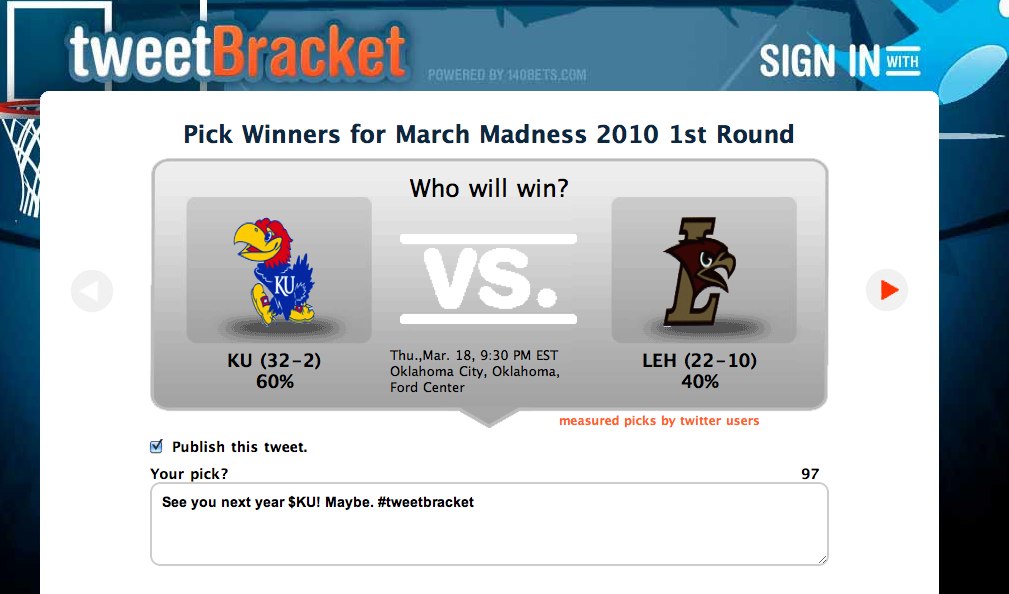