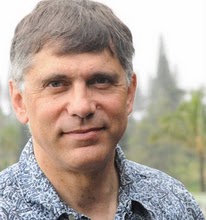 I’m at the NewsMorphosis Conference in Hawaii today locked in a day of debates about the state of news quality and how the hell we find a business model to keep paying for it. It’s a big issue locally– earlier this year three of Hawaii’s five largest TV news stations merged operations and the Honolulu Star-Bulletin is  merging with the other daily paper the Honolulu Advertiser, resulting in plenty of layoffs and general civic concern.

So it’s fitting that the conference ended with a talk by John Temple, the editor of eBay founder Pierre Omidyar’s new Peer News site, a test case in how the future of local news could work. And thankfully, we finally got a few more details on the site and the approach.

Temple was clear to say “there is no silver bullet” when it comes to fixing the media business, but also sees a great deal of hope in the volatility– this from the guy who was head of the now shuttered Rocky Mountain News, a paper that’s already gone through what so many dailies are dreading.

“We’re not trying to reinvent a local newspaper and put it on the Web,” he said. Indeed, the mission of Peer News doesn’t even contain the words “news” or “media” or “paper.” It’s simply “to create a new civic square.” Core to the development of Peer were three questions:

-What is the role of a free press in a democracy?

-How would you best fulfill that on a local level using all the tools available today?

-How do you do that in a sustainable way?

On content, the most interesting thing Temple talked about was doing away with “articles” as we know them. He criticized the static, episodic nature by which journalists have traditional covered news, challenging readers to hunt through archives for the information they want. Instead, Peer’s “building block” will be a page that’s always updated almost like Wikipedia, or as he put it, “something closer to a living history on a topic that changes as it develops.” There will no longer be a sense of “missing” an article, because the “articles” will be living things. That also addresses the critique that local news swarms around one issue, then moves on. “We’re not going to be hot topic driven,” Temple says. Going back to those questions, Temple says the role of a free press is to inform citizens so they can make intelligent decisions. “Let’s stop making it so difficult,” he said.

The other hallmark of Peer’s approach is what has made blogs popular– a sense of community. But it’s certainly a different approach. For one thing, Peer won’t have “reporters” in the classical sense, it will have “hosts” who help facilitate this civic square answering questions for the community.  “In this era, the fact that newspapers still rewrite press releases is an embarrassment,” Temple said. “We’re not going to be stenographers. I think that’s a downfall of journalism.”

But for a site that intends to be very community oriented, there was one big shocker: Peer will not have comments. “(Comments) descend into racism, hate, ugliness and reflect badly on news organizations that have them,” said Temple. Why? Because people do not have to show their faces when they comment so there’s no sense of responsibility, he argued. “We think anonymity is a huge problem when it comes to comments,” he said.

Temple also emphasized that the coverage would not pull punches: “We’re going to call things like we see them. We think there’s real value in taking a stand.”

So what about that business model? As Temple noted, there aren’t that many business models out there to chose from. Unlike most media sites, this will be a member site that people “value and will pay for.” He added “advertising would not be a key focus for us.”

Peer should be launching early next quarter, so we’ll be able to see more of these ideas in action soon. But it’s clear that the site– or “news service” as it prefers to call itself– is taking a markedly different approach from old and what we consider “new” media right now.

And with the benefit of some of these details, it seems less out of step for Omidyar to be starting this company. EBay, after all, was one of the first sites to powerfully leverage community on the Web, pioneering a lot of the systems of trust and reputation we still use today.