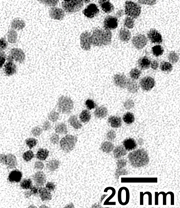 A research team from Japan-based Mitsui Mining & Smelting and Tohoku University says it managed to develop a spreadable electrode that may lead to lower prices for LCD panels in the future. The key element of the technology are indium tin oxide particles of 5-10 nanometers in diameter (pictured) the team has created. Those particles were used to produce a special ink that was loaded in an industrial-use ink-jet printer to draw electrodes on a substrate. The researchers claim panels made this way perform nearly as well as those produced through conventional manufacturing processes. Usually, electrodes need to be installed by using vacuum equipment, which can costs dozens of millions of dollars. This new production method, however, requires a printer that costs just around $10 million. Apparently, the process also requires 20% less indium, a metal that’s widely used to make LCD panels. The research team says that as a result, prices for these panels can be pushed down significantly. It also claims that commercializing the technology for mass-production is planned for next year. Via The Nikkei [registration required, paid subscription]