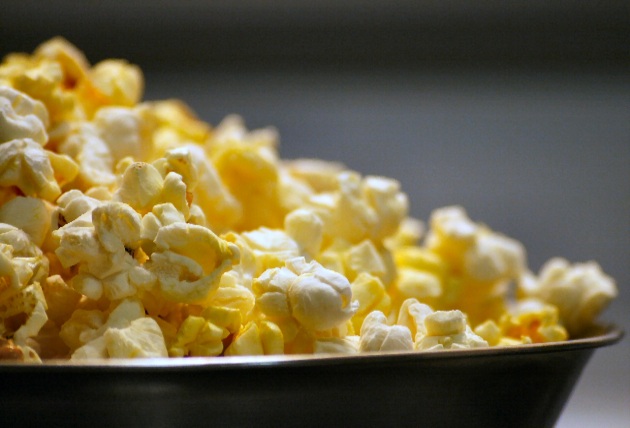 I love how this is controversial. Sony Pictures (creators of Spider-Man) chairman Michael Lynton has suggested that movie theaters offer healthy snacks in addition to their usual parade of garbage, and people have reacted with blind rage. How dare you tell me how to live my life, you pinko liberal communist! It’s like, really? What is so terrible about not covering your popcorn with metric tons of liquid “butter”?

You would think movie theater owners would go out of their way to make their theaters as welcoming as possible, right? Yes, last year was a record year for Hollywood, but take away Avatar, an outlier if there ever was one, and do the numbers look as hot? Not bloody likely.

If I were a theater owner, I’d make it so that I’d have, yes, plenty of garbage (buttered popcorn, soda, etc.) on hand, but I’d also have fruits and vegetables to cater to the Whole Foods crowd. Can you imagine a small movie theater opening up in Park Slope that has arugula as a snack? I’d be a millionaire!

A selection of the comments that made me laugh…

Hmmmm, watching Terminator 12 eating blueberries. That should pack them in to the theater. I think I’ll wait for the DVD and have my popcorn at home. I hate liberals always telling me how to live my life.

is he WANTING to kill of cinema?!

He can have my popcorn when he pries it from my cold dead fingers.

The sony idiot would make a perfect democrat congressman, one who loves to tell you how to live your life. When will the public quit voting for these morons?

You might have already guessed it, but Drudge linked this story, too.

I’m trying to remember the last time I went to a movie theater, and I’m pretty sure it was to see Casino Royale. I picked a Sunday 11am showing, figuring most of the troublemakers would still be hungover. But no! Who should sit next to me but a rather large woman with two bags of popcorn and a soda! What she eats is her business, obviously, but my God in Heaven she was rattling the bag like she was auditioning for Stomp.

3D cinema may be a draw right now, but the minute I break down and say, “Eh, let’s go see Alice in Wonderland” and find that the theater is populated by loud, obnoxious people is the moment I walk right out the door.

And where is it written that you have to eat at all during a movie? Can’t people sit still for two hours without ingesting 18 bags of Milk Duds?