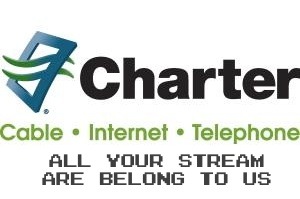 A young man rang Charter Cable to cancel his cable TV connection and maintain his Internet connection. Why? Because cable TV is an anathema to this generation’s vision of media consumption and/or it sucks. So he calls Charter and Charter informs him that he has to pay a $10 no-cable fee and he is told that soon Charter and the rest of the cable companies will control all streaming, thereby rendering all streaming media unusable after “May 1.”

Consumerist has his note:

At this point, he said he would see what the cost of internet alone was, and said there would be a $10 “no cable TV” fee (sounds like b.s. to me), which would make it $49.95 a month for internet alone. Then he went on to say that he strongly suggested that I keep the tv service because come May 1, all of the online streaming services would be shut down because the cable TV providers are taking over, and that the FCC regulations are changing so that the cable companies will have total control over streaming video.

Total control, eh? Sounds fishy. Look: cable companies have cables that come into people’s homes. They can make lots of money offering fat pipes to people who want them. But they don’t. They want to stick to whatever consumption model appeals to them and that model is the the cable channel. Cable channels don’t cost them money to maintain, they don’t have to be up 24/7, and they can sell premium channels and services to rubes who don’t know any better. The Internet is like offering running water to the home. Cable TV is like offering a bottled water service with a special “shower package” for those who want to wash. Which one is more lucrative?