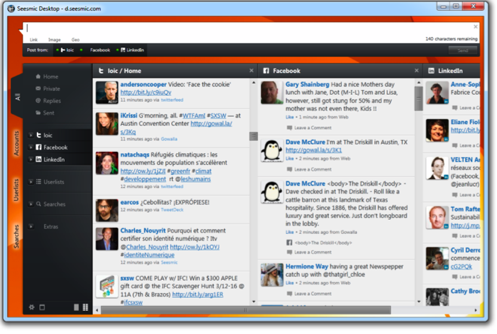 The new desktop platform from Seesmic is built based off of Silverlight, which is a refreshing change from the buggy Adobe Air platform. The design itself is similar in look and feel to the Windows client, and includes functionality for integrating your Facebook, Twitter, and Linkedin accounts. You can also personalize your background of the app. And the new platform works on both Macs and PCs. 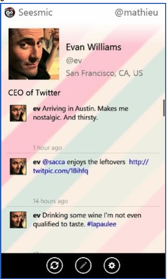 But the most compelling feature of the new desktop platform is that it was designed with plugin features, which will now allows developers build features or integrate their services in Seesmic’s suite of Seesmic clients. One example of a plugin feature is a Bing mapping control plugin, which not only allows you to track geo-location but integrates trackable links at Bing.com

The Seesmic Desktop SDK includes an Extensibility layer as well as a set of utility classes, and the accompanying documentation. Seesmic is also launching a Twitter client app for Windows phones, similar to the BlackBerry app, that will integrated Bing maps and geo-location together.

Le Meur has told me in the past that he has invested in the Windows platform because 80 percent of Seesmic users use a PC. But with the new Silverlight-powered client, both Mac and PC users will be able to experience the client. I’m curious how the client will far against rival technology Adobe Air powered clients, which include Seesmic, and Tweetdeck. And Le Meur is wise to create an ecosystem around his applications, allowing developers to create plug-ins for Seesmic clients.

Disclaimer: Michael Arrington is an investor of Seesmic; I am not.