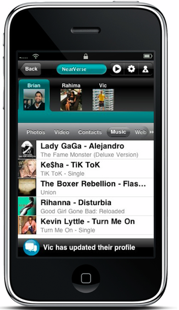 Between the geolocation wars of Facebook and Twitter and the flux of geolocation-based social networks and mobile apps that have been hitting the market recently, the competition is tough. Today, mobile networking startup NearVerse, is launching a free iPhone app, called LoKast, which allows people to share media between iPhones at super-fast speeds. The kicker: the app connects people in its network based on proximity.

LoKast, which is actually short for “local-casting,” allows you to set up a profile that will list all of your photos, selected contacts, videos, web links and music on your mobile phone. You can select which content you’d like to include to the public and which content you’d like to keep private. When a LoKast user is in proximity (300 feet) of other LoKast users, the app will automatically discover other users nearby and allow the user to view and download their content. For example, you can see the iTunes library of any user who is in close proximity to you. You can choose to download a 30-second clip of any song to your own profile and can also follow the link to the iTunes store to purchase the music (LoKast collects an affiliate fee for this, of course). Similarly, you can download photos, videos and even contacts from other users into your profile. You’ll also soon be able to share apps on your phone with other users.

The beauty of Lokast is that it has its own internal network; eliminating the need for 3G connectivity to run the app, as LoKast works in subways, underground and heavily congested areas such as stadiums, where 3G connectivity is unreliable. The startup’s app is effectively all network based and currently has five patents for its proprietary technology.

LoKast is also partnering with bands to help market their content to users. LoKast has struck deals with music distribution companies including The Orchard, IODA and Monalis 360 to provide users with exclusive content within the LoKast app. And production companies, such as Mark Cuban’s Magnolia Pictures, are also using the service to promote their new films.

LoKast will soon be launching an Android app, and plans to launch integration with Facebook Connect. The app itself is incredibly simple to use and seems like it has potential to be a great way to share content on your mobile phone. Of course, some people may not feel comfortable sharing their personal content to complete strangers, so that may be a barrier for certain users.