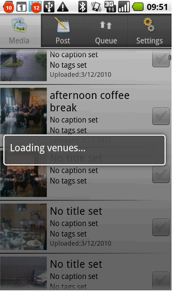 Pixelpipe, the service that lets you syndicate text, audio, video and image files to 120 different social networks, blogs and sites, is adding geolocation functionality to its site with a Foursquare integration. The true virtue of Pixelpipe’s service is the fact that it lets you publish all types of files to various social networks and sites from a centralized place. And the startup offers its service on mobile devices, including a nifty Android app, as well.

Using Foursquare’s API, Pixelpipe now allows you to add check-in to a location with a link to media captured at the venue, which is hosted on your Pixelpipe Page. And you can check-in to a location with media (text, photo, video, audio or a file) with Pixelpipe’s Android app. Pixelpipe will present a list of venues to a user. The number after the venue represents the number of recent check-insFor example, if you are at SXSW, you can record an audio clip or video and post the media long with your check-in to the Austin Convention Center. The link will lead vistors back to your Pixelpipe landing page.

Sort of like a Ping.fm for media, Pixelpipe automatically distributes any new audio files, images, or videos to your profiles on social networks, including Twitter, Facebook, and FriendFeed. You can choose to group these services by tags, so you can be more selective about where you’d like to to post the content. Pixelpipe’s CEO Brett Butterfield tells me that Brightkite and possible Gowalla integration will be rolled out in the future.

As the geolocation wars heat up, it seems like web applications and mobile apps, both new and old, are getting into the location game. Hot Potato, SimpleGeo and new startups StickyBits and Social Great have hooked up their applications with Foursquare. And Foursquare competitor Gowalla upped the ante with a new release.