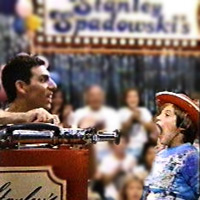 There’s been a lot of hoopla over the past couple of years about Twitter’s so-called “firehose.” Essentially, it’s an open stream of all their data that is provided to developers to use for third-party apps. Foursquare has a firehose of its own, but access to it has been on lock down. Today, for SXSW, Foursquare opened up its firehose a bit more.

Social Great, a service which tracks trending places in cities back on location data, has just gotten access to this firehose of data. This allows them to show in realtime the trending places throughout Austin, Texas, where SXSW is taking place. The service also pulls in data from Gowalla, Brightkite, and GraffitiGeo (Loopt).

As Polaris Ventures EIR Jon Steinberg notes (who helped build Social Great), “the numbers look crazy.” What he means is the check-in data at SXSW. Judging from what I’m seeing on the ground here in Austin, that may be an understatement. Venues routinely have dozens if not hundreds of other Foursquare users at them when they’re trending.

SimpleGeo, one company that has had early access to Foursquare’s firehose, built Vicarious.ly to visualize real-time check-ins around Austin. That data looks fairly insane as well. Most of the check-ins appear to be coming from Foursquare (which saw over 300,000 check-ins on Thursday alone) and Gowalla, but co-founder Joe Stump notes that the battle is too close to call still.

One other note: all these check-ins are made possible by the fact that AT&T’s network has been up and working the whole time. It’s been impressive. Crisis averted, so far.