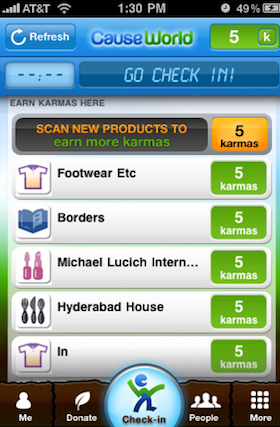 Last night, we wrote about a CauseWorld teaming up with TechCrunch to provide double karma points during the SXSW festival starting today in Austin, Texas. These points, obtained through checking-in at various locations, can be used to donate to charities through big brands that support the app. It’s a great feature, and we hope you’ll use it in Austin. What we didn’t talk too much about is the app itself that enables it, CauseWorld, which just released a new version of its iPhone app in the App Store.

We first covered the app back in December, but now it has been significantly upgraded. One of the core ideas behind the app has always been the intersection of the mobile and physical world (something I’ve thought a lot about as well). A new feature bridges the gap a bit more as you can now scan barcodes on individual items with your iPhone to earn extra karma points. Proctor & Gamble are the ones sponsoring these points on different products they make. It’s a good idea, because even if you choose not to buy the item, it forces you to pick it up and look at it a bit.

This feature points to the bigger idea that CauseWorld parent Shopkick is thinking about when it is ready to launch its flagship product (CauseWorld was born as just a trial site of an idea, but quickly ballooned into an app with over 300,000 downloads). It’s the idea that the cellphone is the only interactive tool you carry in a non interactive setting at all times. So why not use it to make the physical retail space more interactive, Shopkick CEO Cyriac Roeding reasons.

Another huge addition to the CauseWorld app is a social layer. Previously, the app was all about what you did. But now you can hook it up to Facebook (which will earn you bonus karma points) and share the progress and donations you’re making with your friends. On top of this there are new features such as gifting which will help the app virally spread through social networks.

This social layer also allows for a leaderboard to be created showing which of your friend have donated the most karma points. Sometimes social pressure is the best way to get people motivated.

Again, CauseWorld stems from trying out an idea to see what would work with the larger Shopkick plan when that eventually launches. But the response to it has shown Roeding enough that he believes “the next big thing after the check-in is the check-out.” Given the big brands they’re signing up to support CauseWorld, he just might be right.

You can find the new CauseWorld 1.5 in the App Store here. It’s a free download.