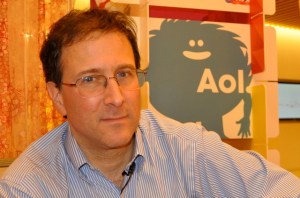 Editor’s Note: This guest post was written and reported by Steven Rosenbaum, the CEO of Magnify.net.

Today, the world of music, film, and the internet converges on Austin, Texas for what is fast becoming one of the key places to launch new software products. For the folks at AOL, South By Southwest—known also as SXSW—will be a debutant party for AOL’s new Seed form of journalism.

AOL has it’s hopes pinned on that fact that SXSW will be the perfect place to both introduce the new Seed content machine to a large audience and test the concept of mixing freelance and pro-journalists to create a huge amount of original content. Seed has been operational for a few months now, but SXSW will be it coming out party, according to former New York Times writer Saul Hansell who is now the Programming Director of Seed.

How’s this all going to work? Well, fielding an army of freelancers to cover SXSW’s 2000 bands is certainly a baptism by fire. AOL solicited freelance writers on its music site Spinner. Those interested in contributing were redirected to Seed, where they signed up. Hansell asked for work experience, music tastes, and clips. He says: “I can tell you now that we didn’t read the clips. We looked at these things to see if people can follow directions and if they didn’t write us 1,000 words when we asked for 100. And that was the criteria.”

Next, each of the more than two thousand bands that will play at SXSW were assigned to a Seedster to interview. Hansell says he had his fingers crossed. “I think we’re over the hump of my darkest fears,” he says, “and I had many of them. The first dark fear was we’d get total losers. The second fear was how good the interviews would be. “

Now, with first results surfacing on Spinner, Hansell says, “The people who sent us e-mails back were entertainment writers for weekend publications, kids in J-school who are also in bands, exactly the right type of people.” But they aren’t treated exactly like journalists. Hansell points out that Seedsters don’t get a press pass—if they want to hear the bands live they’ll have to buy their own ticket. But he expects some number of folks to try and hustle their way into shows by waving around their AOL clips. “That’s just expected.”

With clips like these, Seed writers are held to the same standards as any other freelancer on the AOL site. AOL Music’s managing editor Melissa Olund and her team edit the submissions and have final say on what runs and what doesn’t.

Why launch at South By Southwest? For Hansell, that was a no-brainer. “I know it is communicating our ambition. We are about reporting. We are about doing big and interesting things.” The big SXSW bet is that Hansell and his Seedsters can make more content, faster, better, and cheaper than anyone else. In addition the distributed community of potential contributors on Seed, AOL already employs 3,500 professional journalists on staff or as regular freelancers. And AOL has some interesting content search technology from its earlier acquisitions of Relegence and Truveo.

Man vs. Machine: The Bionic Solution 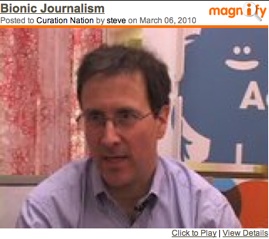 AOL has built a three legged stool to create content: part professional, part freelance, and part aggregated . . . but its model is far more hand-crafted than the other new players in the mass content creation space. “The essence of journalism has always been separating signal from noise,” says Hansell. “It’s all judgment. It’s all selecting the best bits.” What AOL hopes to create with Seed is an editorial machine which automates the assignment process as much as possible, but keeps the final selection part in human hands.

“I call it Bionic Journalism,” says Hansell. “Left brain, right brain. We are trying to take the best of a machine, which does lots of things over and over again, and a person.” It’s a tall order, and will take a lot more than a couple thousand band interviews to prove it works.

Is AOL trying to beat Google at the news gathering game? Hansell says it’s far more than that. “Google News will give you a whole clump of things that are probably about the same thing with a reasonable degree of accuracy. But it can’t tell you what it’s really about. It can’t summarize it. It can’t translate it into people language.”

The Ugly Economics: Not My Problem

So, what about cost? Some freelancers are complaining that the web doesn’t pay a living wage. “That is not my problem” Says Hansell. He quickly rephrases, “It is my problem but I didn’t do that, the world did that.”

He is however trying to sort it out. Asks Hansell: “How do you deal with the fact that the economics of the Internet can’t let you pay what people think that a freelancer can get paid? One way is you give them a bundle. If you give them ten of the same assignments, even if the price is low, by the time they’re done with the tenth one, they can do the tenth one in half the time they could do the first one.”

Here’s another one of Hansell’s analogies: “Seed is to freelancing as Ebay is to classified ads.” AOL’s Seed may be the future of freelance, but the math remains daunting; “The fact that we gave somebody ten interviews to do after she did one or two before, she’s delighted. That’s 500 bucks. That’s 500 bucks more than she was going to make doing something else, and it’s fun.” Well, “delighted” might be pushing it. Pumping out ten assignments for the price of what many professional freelancers charge for one will favor quantity over quality.

But if it all works—if Bionic Journalism can attract a massive audience and save AOL—what’s the home run? Here Hansell gets a little bit ahead of himself, but at least he is thinking big:

And it all starts this weekend with 2,000 indie rock band interviews.

Steven Rosenbaum is the CEO of Magnify.net, a video curation platform that powers more than 68,000 web sites. Rosenbaum is a serial entrepreneur and Emmy Award winning documentary filmmaker. Watch his video notes of Saul Hansell talking about Bionic Journalism and AOL’s larger journalistic ambitions by clicking in the two previous links. .Follow Steve on Twitter.