As I’ve made abundantly clear over the past several days, just about every service that has anything to do with location is launching something at the SXSW festival which starts tomorrow in Austin, Texas. Don’t believe me, here’s a small sampling (Foursquare, Gowalla, Loopt, Whrrl, Plancast, Brizzly, Twitter). So, how are you going to wrap your head around all this location data? SimpleGeo has an awesome way.

Vicarious.ly is a real-time location-based stream of information presented in a nice visual way. While the plan is to eventually launch one for many different cities around the U.S. and eventually the world, the first one is based around Austin, for SXSW. To make it, SimpleGeo partnered with BlockChalk, Brightkite, Bump Technologies, Flickr, Fwix, Foursquare, Gowalla, and Twitter to pull all of their location data and place it both in a constantly-updating stream, and put data points on a Google Map at the top of the page. These data points are represented by the logos of the various companies, so it’s easy to follow visually.

Those concerned about the privacy implications of this need not worry, Vicarious.ly doesn’t pull actual user names from the companies mentioned above. Instead, they simply note that “someone” checked-in at a venue. They do, however, give the venue name, which is a hyperlink. So if someone just checked into Stubb’s Bar-B-Q in Austin on Gowalla, you’ll see a link back to the Gowalla page for that venue. Likewise, if someone uploads a geotagged picture to Flickr, you’ll see a thumbnail of the picture in Vicarious.ly’s stream, and clicking on it will take you to that picture’s Flickr page.

It’s fairly amazing to see just how much activity there is even today, the day before the conference starts. Tomorrow and the weekend should be insane. “The amount of real-time, location-based information we’re indexing is staggering.  We wanted a powerful way to showcase that, so we built Vicarious.ly and targeted the launch to coincide with a massive gathering of geeks,” co-founder Matt Galligan says about the project.

You’ll note just how much of the activity are check-ins from either Foursquare or Gowalla. Those two are likely to be the two main competitors in the location war that will take place this weekend. (If you’re surprised not to see tweets in the stream, it’s a bug that SimpleGeo hopes to squash tonight).

For more on SimpleGeo, which has a powerful set of tools to easily provide geolocation infrastructure for other companies (such as the new hot startup, StickyBits), check out this and this. 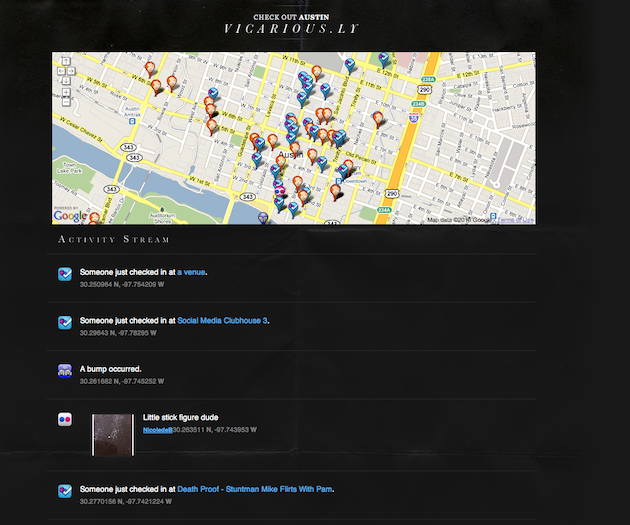