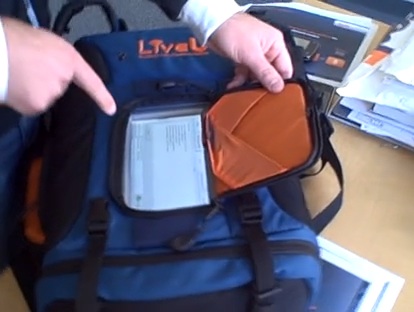 Live video streaming on the web is becoming more and more popular, and for news organizations and brands who don’t want to shell out thousands of dollars a day for a satellite truck there is another option. At SXSW, Kyte is going to release a new product called Kyte LivePro Unwired with Spin magazine.

LivePro is a computer in a backpack connected to six data cards all uploading live video at the same time, balancing the load across three different carriers (Sprint, AT&T, and Verizon). It is made by LiveU and Kyte will be reselling it to its larger customers. (LiveStream uses the same technology in its Livepack).

Kyte CEO Daniel Graf came by my office the other day to show me the technology (see video below). It is incredible that a backpack can now replace a satellite truck. You won’t get HD quality, but you can get broadcast-TV quality, and it is certainly better than uploading video from your mobile phone, which Kyte also allows. He says that typical livestreaming rates with the backpack are 700 kilobits to 1 megabit per second.