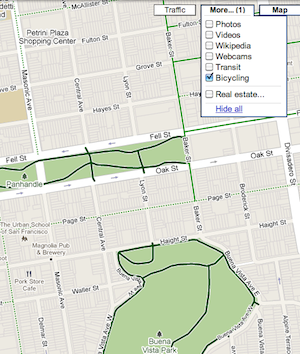 Yahoo is backing a cycling team. I don’t know why — but they’re doing it. And today their passion got a little boost: from Google.

Google is announcing tomorrow at the National Bike Summit in Washington, DC that Google Maps will now include biking directions in the U.S. Apparently, this was the most-requested feature for the service, as some 57 million Americans ride bikes.

Thousands of miles of bike trails have been added to the maps. And there is also step-by-step directions, much like you can see for driving or public transportation directions in the maps. There is also a new layer that shows bike trails and bike-friendly areas on roads. Yes, it’s a bike-lover’s dream.

To make this new feature happen, Google partnered with Rails-to-Trails Conservancy, a nonprofit group that converts old rail lines into bike trails. The group have given Google information on some 12,000 miles worth of trails in the U.S.

To coincide with the launch, Google also has a cycling contest. To enter, you simply have to tweet with the hashtag #bikewithgoogle. The randomly selected winner will get a voucher for $2,500 to be used at American Cyclery.

I fully expect that hashtag to be dominated by members of Yahoo’s cycling team tomorrow.

Find out more about the new feature in the video below.