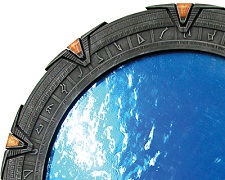 We MUST stop this. Somehow Smallville must be canceled before it surpasses Stargate SG-1 and becomes the longest running Sci-fi show in North America’s history.

Now I’m not suggesting violence here. Oh no. That’s dumb. But maybe something like what Jericho fans did. They mailed in boxes and boxes and boxes of peanuts to get the show started again. Maybe if we send in cases of green Jell-O seeing as it Jack O’Neil’s favorite desert. I don’t know. Something needs to be done, though.

Stargate SG-1 is the most complete and thorough sci-fi show every created. It ranks higher than both Star Trek and Star Wars in book. Watch the show from the very first NSFW episode through the end. There are complex story arcs and character development found in no other sci-fi show.

Sure, there are trademark quirks about the show, but it’s the fact that the show is never too serious and always pokes fun at both itself and the genre in general that makes it so great. We can’t allow Smallville to surpass the ten year mark and therefore become the longest running sci-fi show.

I’m sure there was a similar outcry when Stargate SG-1 passed X-Files nine season run thus setting the record, but trust me, X-Files has nothing on SG-1. I just finished watching the entire X-Files series start to finish and there can’t be another show with as weak of a series storyline than X-Files. Sure, some of the episodes were epic, but a lot were not. It took a lot to sit through seasons after the mystery about Mulder’s sister was solved and even more after David Duchonvy left the show.

Smallville is a fine show. That’s clear otherwise it wouldn’t be contesting the record, but it’s not SG-1. Hopefully the ascended beings above will intervene and do something to stop Smallville from kicking SG-1 out of the record books.