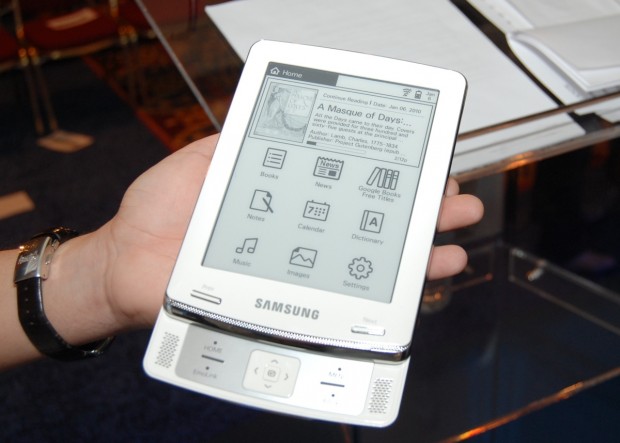 The Nook is soon going to have a bit of competition on its home playing field when the Samsung E6 reader hits shelves this coming spring. Although it probably doesn’t have much to worry about. We spent sometime with the slider at CES and can’t see any reason why most consumers would opt for the $399 reader instead of the hot Nook.

Sure, it has a touchscreen meant for note taking and a bit more compact screen, but those features alone cannot justify the $130 price difference. The nook is more sleek and the color screen is certain an attention grabber even if it’s a bit laggy in use. There is a chance, however, that the $399 price we heard at CES will get a cut before it hits the retail market, though. But even if the E6 is priced at the Nook’s $259 price-point when it drops shortly, it probably still won’t see the same sales numbers.

Update: Barnes and Noble was kind enough to drop me a note pointing out my errors. I love that. First, the Samsung E6 will not be sold in B&N stores like my headline previously stated. B&N is simply providing a storefront for the content, showing that the company is willing to licence and branch out from a Nook-only business model. The price will also be $299 when it launches this spring.