It’s a little surprising to see a Twitter application coming out of Fuze Box (formerly CallWave), which creates visual collaboration product. The company has clearly caught the Twitter bug (albeit a little late) and today is launching Tweetshare, an third party Twitter app that allows anyone to immediately publish any type of content to the web, including HD video, presentations, images and more and automatically start Twitter conversation threads around their content. It’s kind of like FriendFeed meets Twitpic or Twitvid. Tweetshare has also rolled out a companion iPhone app that allows mobile users to upload content, tweet and create discussions on the Tweetshare platform.

A social alternative to static landing pages, Tweetshare aims to be a Twitterfied-Facebook Fan Page. Twitter users can post relevant content, such as presentations, images, videos and PDFs, and can also Tweet from the platform. Any comments made on a Tweetshare page or similarly, made on Twitter in response to posted content is also threaded on the page. A free application, Tweetshare also provides measurement and analytics tools, including polling functionality and the ability for users to become a fan of a brand’s Tweetshare Fan Page. And similar to YouTube channels and Facebook pages, Tweetshare Fan Pages can be branded and customized.

The site is missing Facebook connect, but Fuze Box says this will be rolled out soon. Of course, Mixx offers branded Twitter channels through TweetMixx, which offer some of the functionality of Tweetshare. And Tweetmeme also offers a similar product. Its unclear if there is any monetization that can be made from the Tweetshare, but the application seems that it could be useful.

Fuze Box has a pretty unique history as far as startups go. CallWave was founded in 1998 and went public in 2004, trading on NASDAQ under the ticker symbol CALL. After reaching a peak soon thereafter of over $15 per share, the stock dropped steadily, dipping as low as 50 cents early this year. Deciding to cut its losses, the company delisted itself from NASDAQ on Monday after buying back shares from public shareholders at a 44% premium over the current market value and paying out a total of $10 million. Last summer, the company rebranded itself as Fuze Box and launched Fuze Meeting, which it’s pitting as a sleeker, lighter, and cheaper alternative to services like WebEx.

Although the company has experienced some tough times over the past few years, it appears to be in a better place now. And the startup is obviously broadening its product base. However, while a little late to the Twitter frenzy, Fuze Box is moving in the right direction. 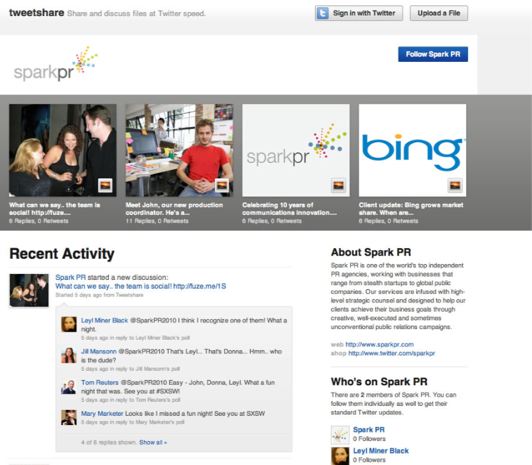