First launched back in April 2009, TweetPhoto has been steadily building out its service with multiple useful features, including Foursquare integration and a partnership with Kodak. Today, the site is getting a huge overhaul with more social features and a new iPhone app.

TweetPhoto has now added the ability to sign in with Twitter OAuth, Facebook Connect, MySpace OAuth and Foursquare OAuth so that a user of any one of these social networks can use TweetPhoto as a stand alone photo sharing service. The site will also be rolling out LinkedIn support in the next few weeks. In addition to login capabilities across all four of these services, TweetPhoto users can also link these social networking accounts together. Once you link your Facebook, Twitter, MySpace , or Foursquare accounts on the site, your photos uploaded to TweetPhoto can be simultaneously broadcast to all of the networks. Third party applications that use TweetPhoto as the default photo uploader such as TweetDeck and Seesmic’s BlackBerry app, will also include this functionality. 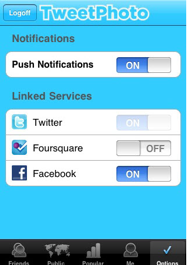 In connection with the new social broadcast features, TweetPhoto is rolling out a new API to include over 35 new API calls. And as we wrote last year, TweetPhoto got into a bit of a pickle over its logo. That combined with Twitter’s trademark of the word “Tweet,” is resulting in TweetPhoto completely rebranding its service. The first step of this effort is a new logo, which we’ve attached above. A new name is forthcoming, says TweetPhoto, and its focus will be much more on the mobile side of things.

While TweetPhoto is still not getting the same amount of traffic as the leaders in the space, TwitPic, the site is edging out fellow competitor yFrog, according to January’s Compete numbers. But as TweetPhoto, which met with a little bit of scandal last fall, makes its offerings more social and interactive, the site could even give TwitPic a run for its money.