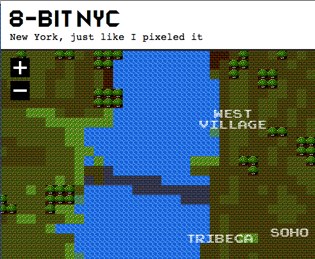 8bitnyc is a fully interactive map of New York City that lets you drag, search and zoom in and out just like Google Maps. Except it is displayed as an 80’s style 8-bit video game map. The map was created using map data from OpenStreetMap.

Creator Brett Camper says “I created 8-Bit NYC, mixing the lo-fi overhead world maps of 1980s role-playing and adventure games with the kind of geographical data that drives today’s web maps and GPS navigation. It’s interactive (like Google Maps), letting you zoom from a view of the whole city, down to an individual street — any address, anywhere in the city. Here are a few highlights: Central Park, Greenwich Village, World Trade Center.”

And he’s not done. Camper is asking for donation to help him build out fifteen more 8-bit city maps. The funds will be used for web hosting and the Amazon EC2 computing time needed for drawing the maps. Eight of the cities he has already selected, the other seven will be selected by donors. More information is here.