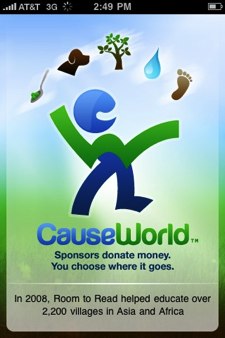 CauseWorld, a mobile app that lets users check in to retail shops for credits that can be donated to charity, is clearly on a roll. The app first launched in December as “the first mobile application that let’s you do good deeds simply for walking into a store.”

CauseWorld app users earn “karma points” when they walk into stores and check in with their cell phone. No purchase is required at any store, and karma points can be redeemed nine predefined good causes. Big brands like Kraft Foods and Citi (both are on board) then turn the karmas into real dollar donations to those causes. Food for poor families, water in Sudan, trees in the Amazon, etc. are examples of the causes.

The company has now donated about half of the original $500,000 donated by Kraft and Citi for the test period. And these brands seem to be happy. CauseWorld has been downloaded more than 300,000 times, probably putting it on par with location based check in networks like FourSquare. Last week Proctor and Gamble said it will give users karma points for scanning the bar codes of 27 products, like toothpaste or face cream. And now Citi will announce that it is expanding it’s support of CauseWorld. It’s total contribution is now at $700,000.

The charity angle on CauseWorld is brilliant and gives users an added incentive to check in at retail stores. But ultimately what Shopkick, the company behind CauseWorld, is aiming for is a bridge between the mobile world and the physical retail space. CauseWorld. Shopkick has much bigger plans, they say, that’s all very hush-hush. Sometime later this year we’ll see their new product.

The company, founded by Cyriac Roeding, has attracted some of the most high profile investors in Silicon Valley: Kleiner Perkins Caufield & Byers and Reid Hoffman.

The press release is below:

New York, NY – March 9, 2010 – Citi announced today that it will expand its support of shopkick, Inc.’s successful CauseWorld application by providing an additional $350,000 in financial support for CauseWorld causes. Citi’s total contribution now stands at $700,000. About half has already been given to the causes by Citi on behalf of CauseWorld shoppers.

Citi also announced that the CauseWorld application would add two microfinance organizations – BRAC and ACCION USA – to its cadre of causes to which shoppers with the app may now donate.

“Already, the CauseWorld app is having a strong impact. It speaks volumes about the potential power of location-based mobile services. Citi continues to explore ways to bring new value, including convenience and smarter ways to use money, to customers and potential customers by working with leading companies, VCs, and startups like shopkick,” said Jeff Semenchuk, head of Citi’s Growth Ventures unit. “Citi is committed to meeting our customers’ emerging mobile, retail and payment needs,” he said.

“The CauseWorld app is proving to be a very effective way for Citi to support leading social impact-focused nonprofit institutions. The fact that shoppers are making the decisions makes it all the more interesting. We’re pleased that the CauseWorld app will also now include two of the leading microfinance organizations, BRAC and ACCION USA,” said Robert Annibale, Global Director of Citi Microfinance and Community Relations.

BRAC is a development organization dedicated to alleviating poverty by empowering the poor to bring about changes in their own lives. Shopper-generated “karma” will help provide microcredit loans to give poor women in Africa the tools they need to generate income for themselves and their families.

CauseWorld users will be able to donate to BRAC and ACCION USA immediately.

Since its December 23 launch, Citi has helped support a number of important causes through CauseWorld, including providing clean water for people in developing countries such as Sudan, providing meals to families in the US, planting trees as well as donating books. CauseWorld users are also benefiting Haitian and Chilean earthquake relief efforts.

“Citi saw the potential in CauseWorld before the app was even built,” said shopkick CEO Cyriac Roeding. “It’s every entrepreneur’s dream to work with people who ‘get’ the idea, even before it becomes reality. Citi’s new microfinance causes and additional financial contribution underscore their focus on creating sustainable impact.” shopkick is backed by Kleiner Perkins and Reid Hoffman.

The CauseWorld application, available for Apple’s iPhone and Google’s Android, was released in December. The CauseWorld app works by allowing iPhone and Android users to collect “karmas” by opening the app and “checking-in” when they come close to, or enter, retail stores. Karmas are then funded by Citi and Kraft Foods so that the user can spend collected karmas on real world charitable actions like planting trees, feeding families in America or providing clean water to people in Sudan.

Once the chosen action has been carried out by the charity partner, users can publish their good deeds to their Facebook feed, so all of their friends can see their pride and join in supporting good causes. A list of participating retail stores is included in the CauseWorld app and no purchase is necessary at the stores to earn karmas. With the addition of BRAC and ACCION USA, eleven charities have partnered with the CauseWorld App including: American Red Cross, Feeding America, American Forests, GlobalGiving, DonorsChoose.org, Prevent Child Abuse America, Carbonfund.org, American Humane Association and Room to Read.

How it works:
· Users download the free app on their iPhone.
· Collect karmas, the currency created from sponsorship money from Kraft Foods and Citi, by visiting participating retail locations.
· Spend karmas on real world charitable actions like planting trees, feeding the hungry and providing clean drinking water.
· Charities carry out the actions.
· Publish on Facebook to show friends and family.
· Build up a profile with icons showing all your karma expenditure.
· Earn badges and level up by earning more karma.

The CauseWorld App is available for free from the App Store on iPhone or at www.causeworld.com/iphone.

About Citi
Citi, the leading global financial services company, has approximately 200 million customer accounts and does business in more than 140 countries. Through Citicorp and Citi Holdings, Citi provides consumers, corporations, governments and institutions with a broad range of financial products and services, including consumer banking and credit, corporate and investment banking, securities brokerage, transaction services, and wealth management. Additional information may be found at www.Citigroup.com or www.Citi.com.

About shopkick
shopkick is a new Menlo Park-based startup funded by Kleiner Perkins’s iFund and Reid Hoffman, founder and Chairman of LinkedIn, and investor in Facebook. shopkick Inc. was founded based on the belief that the intersection of mobile and physical retail is the next big opportunity in mobile to create consumer value. The Silicon Valley-based company’s goal is to drastically improve the shopping experience of consumers by utilizing cell phones’ location awareness, unprecedented personalization capabilities, and social/viral features. shopkick launched its mobile application CauseWorld in the United States in December 2009, supported by Citi and Kraft Foods. The shopkick team consists of mobile and web experts who previously built the mobile division of CBS in Los Angeles, and successful mobile and online ventures in Europe and the U.S. (12snap, GoldPocket Wireless, Loopt, CommerceFlow, Rojo), and from Google, TellMe/Microsoft, and Procter & Gamble.

About ACCION USA
ACCION USA is a leading U.S. microfinance organization that provides access to capital and financial education to low- and moderate-income individuals, primarily minorities and women. A pioneer and recognized leader in U.S. microfinance, ACCION USA empowers individuals to create sustainable businesses, increase family incomes, and contribute to the economic development of cities across the U.S. Since inception in 1991, ACCION USA has provided over $119 million in small business loans ranging from $500 to $50,000, offered nationwide via the ACCION USA online lending platform. For more information about small business loans, visit www.accionusa.org.

BRAC
BRAC, an international development organization, was founded in Bangladesh in 1972 by Fazle Hasan Abed. Today, BRAC has grown to become the world’s largest NGO employing more than 120,000 people, the majority of which are women, and reaching more than 110 million people with development interventions in Asia and Africa. Since 2002, BRAC has been using its experiences of innovating and scaling up multifaceted anti-poverty programs to energize and accelerate poverty alleviation efforts in other countries. Currently BRAC has country programs in Afghanistan, Liberia, Pakistan, Sierra Leone, Southern Sudan, Sri Lanka, Tanzania, and Uganda, and is beginning programs in Haiti. BRAC also provides support to other NGOs in Haiti, Honduras, India, Indonesia, Pakistan and Peru. BRAC USA is an affiliate office of BRAC that engages volunteers, supporters and other resources to further BRAC’s vision of a world free from all forms of exploitation and discrimination where everyone has the opportunity to realise their potential.